The 24th governor of RBI Urjit Patel Monday stepped down stating personal reasons for the decision.

Reserve Bank Governor Urjit Patel stepped down on Monday citing personal reasons for the decision. The resignation comes following friction between the government and the RBI. Patel's tenure was scheduled to end in September 2019. His decision to cut short his term in office has made him the shortest serving RBI governor since 1992.

Patel was hand-picked by the BJP-led government after his predecessor Raghuram Rajan was denied a second term. Rajan has expressed his concern over the resignation. In an interview to the Economic Times he said, "We need to ask what was the circumstances that led to Dr Patel resigning and the government must take extreme care in how it proceeds further in its relationship with the RBI. Wiser head should prevail in the current environment and the circumstances that led to this resignation have to be reversed."

Patel said, "It has been my privilege and honour to serve in the Reserve Bank of India in various capacities over the years, support and hard work of RBI staff, officers & management has been a proximate driver of Bank’s considerable accomplishments in recent years. I take this opportunity to express gratitude to my colleagues & Directors of RBI Central Board & wish them all the best for future." 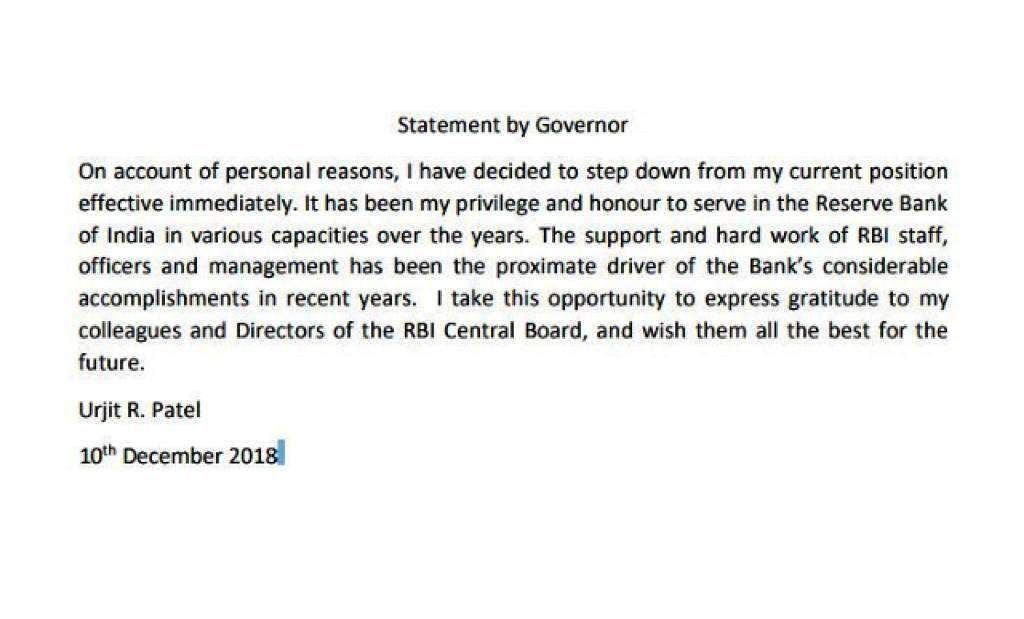 Patel is among the few with a corporate background to become RBI Governor, the top post at the Mint Street that has been previously held by mostly career bureaucrats and economists.

Recently,  the public spat between the government and RBI got wider public attention, the RBI's central board, at its November 19 meeting, decided to climb down and to set up a panel to study the quantum of capital it requires apart from restructuring loans of up to Rs 25 crore to give a succour to the troubled MSMEs.

Congress reacted sharply on the resignation and stated," Integrity of another institution stands denigrated by Modi regime."

P Chidambaram, Congress leader and former Finance Minister said he was not surprised by the development as "no self-respecting scholar or academic can work in this government".

The Government acknowledges with deep sense of appreciation the services rendered by Dr. Urjit Patel to this country both in his capacity as the Governor and the Deputy Governor of The RBI. It was a pleasure for me to deal with him and benefit from his scholarship. (1/2)

Dr Urjit Patel is an economist of a very high calibre with a deep and insightful understanding of macro-economic issues. He steered the banking system from chaos to order and ensured discipline. Under his leadership, the RBI brought financial stability.

Dr. Urjit Patel is a thorough professional with impeccable integrity. He has been in the Reserve Bank of India for about 6 years as Deputy Governor and Governor. He leaves behind a great legacy. We will miss him immensely.

Surprised at the news that RBI governor has resigned. The previous meeting was held in such cordial atmosphere that it comes as a shock. All directors said media had created a wrong perception while inside it was totally different. That makes it even more surprising

On the contrary, a BJP member and former Finance Minister Yashwant Sinha in an interview to  CNBC-TV18 said, "The resignation is a clear sign of the government trying to interfere with the working of the RBI and nothing has changed."

Jayati Ghosh, Professor of Economics, at the Jawaharlal Nehru University while talking to TNIE says the move should have come earlier, "I believe he should have stepped down when demonetisation happened, the damage to the RBI is irreparable since demonetisation. The government has destroyed the autonomy of RBI. Media has been subservient."

The government also recently invocated the never-before-used Section 7 or the proposed economic capital framework for the central bank with was not met with much enthusiasm from the RBI.

The government, which is staring at falling revenue and a likely fiscal slippage, wants the RBI to part with a large portion of it Rs 9.6 trillion of its cash surplus, which the central bank has been sternly opposing.

(With input from PTI)

More from Business.
Now we are on Telegram too. Follow us for updates
TAGS
Urjit Patel RBI RBI Governor congress Raghuram Rajan