What to expect in 2019: Stock market volatility, rate cuts, stable rupee and fuel

If we said 2018 was tumultuous, it would be an understatement.

If we said 2018 was tumultuous, it would be an understatement. Financial markets across the board, from currency, commodities to the stock market, witnessed swings like no other year. As we welcome the New Year, the roller-coaster ride witnessed in financial markets in 2018 is set to continue.

General elections in India, the escalating trade war between the US and China, the two biggest economies in the world, international oil prices, the strength of the US dollar, are some key factors that are expected to turn the volatility meters up. From a personal finance standpoint, the most important thing to watch out for you are factors that influence interest rates. All your investments are influenced by interest rates. Your fixed deposit rates and the return on debt funds change with fluctuation in interest rates. The interest rate on your home loans, personal loans, and vehicle loans is affected by the interest you pay. Equity markets typically have an inverse relationship with interest rates. Stock markets tend to fall or stay flat if interest rates rise. They rally if interest rates fall. 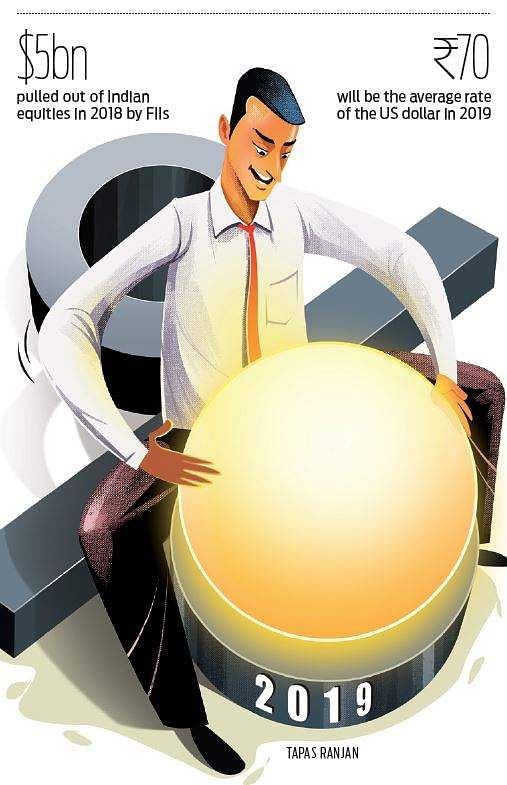 The Reserve Bank of India surveys forecast a relatively benign consumer price inflation over the next few months. Oil prices that began the year at $63 per barrel rose sharply by October 2018 to $86 per barrel, and have tumbled since then to hover around $66 per barrel. International oil prices are expected to remain below $70 per barrel in 2019. This could be good news for the Indian economy as high oil prices have a cascading impact on inflation in the Indian economy due to a rise in transport costs.

Bond prices tend to firm up when the risk in the economy is seen to rise. The 10-year government bond is traded in the secondary market. The interest rate on this paper is considered a key benchmark. Just like oil prices, bond prices have retreated to nearly the same level as the start of 2018. In 2019, the possibility of a stable government is likely to bring down bond prices. If general elections throw up an uncertain outcome, bond prices could rally as the risk in the economy rises. There is a general expectation that inflation would remain stable in India and there is a chance of a rate cut in 2019 if the consumer inflation rate remains below the RBI repo rates. This is more driven by the need to boost the sentiment in financial markets ahead of polls.

India’s benchmark indices are expected to witness volatility in 2019. By the time the new government takes office at the end of May 2019 or early June 2019, there is a good chance that stock markets could have gone through a sharp rally or a sharp fall. According to one prediction by Kotak Securities, the NSE Nifty could hover around 10,000 to 10,500 by December 2019 if the election outcome is negative. It could rally to 12,500-13,000 by December 2019 if the election outcome is positive. Midcap shares, hammered this year, could make a comeback. Large-cap shares inched up in 2018. They may gain some ground too as profits are expected to grow faster in 2019-20. Either way, a significant movement in share prices is expected based on external events.

Foreign institutional investors have pulled out over $5bn from Indian equities in 2018. This is the first outflow of money since 2011 and the highest after outflows of $12.9 bn in 2008, during the peak of the global financial crisis. Foreigners have pulled out more money out of Korea, Taiwan and Thailand. So, India is not an exception. If the US dollar’s rise stalls and interest rates remain stable, global flows may move towards emerging markets like India. In an outlook for 2019, Vanguard, a giant US-based fund manager, predicts a gradual slowdown in the US and European economies and a continued slowdown in China in 2019. Any indication of a recession in America could mean no more interest rate hikes. This is good news for stock markets around the world in 2019 and Indian equities.

Domestic investors have rapidly invested over the past two years in Indian equities. Close to Rs 7,500 crore flow into equity or equity-linked schemes through systematic investment plans every month. This prevented a fall in Indian share prices in 2018. In the new year, mutual funds are expected to continue their march and invest more in the Indian stock market.

What to do if you are a small investor

For small investors, systematically allocating funds towards life goals is the best way to deal with financial market volatility. If you are young and looking to build your savings, allocation to equity assets is a must to generate long-term capital. A small amount invested today could grow to a sizeable saving over 15 to 20 years. The year 2019 should be a good one for those who wish to make a new beginning.