Kerala has emerged as the best state in the country in terms of healthcare performance, reveals a latest Health Index report, jointly prepared by the World Bank and Niti Aayog.

NEW DELHI: Kerala has emerged as the best state in the country in terms of healthcare performance, reveals a latest Health Index report, jointly prepared by the World Bank and Niti Aayog. Kerala was followed by Punjab, Tamil Nadu and Gujarat.

While Uttar Pradesh has shown large improvement in healthcare outcome, it was still ranked at bottom of the Health Index report, place behind Rajasthan and Bihar.

“Jharkhand, Jammu and Kashmir and UP showed the maximum gains in improvement of health outcomes from base (2014-15) to reference year (2015-16) in indicators such as neonatal mortality rate, under-five mortality rate, full immunization coverage, institutional deliveries, and People Living with HIV (PLHIV) on anti-retroviral therapy,” the report said.

The NITI Aayog said it is a weighted composite index based on indicators in three domains: health outcomes (70 per cent weightage), governance and information (12 per cent), and key inputs and processes (18 per cent). 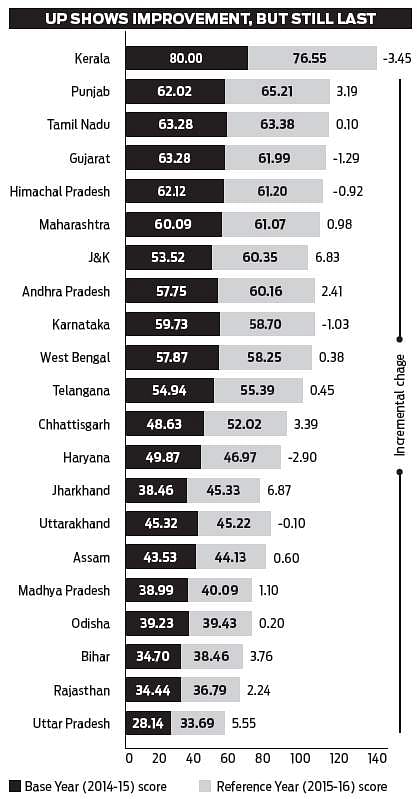 “The Health Index will act as a tool to leverage cooperative and competitive federalism, accelerating the pace of achieving health outcomes,” Amitabh Kant, CEO, Niti Aayog said while releasing the report on Friday.

The index would also help the government to measure improvement of state in terms of health infrastructure and would be linked to incentives under the National Health Mission, and would also serve as an instrument for “nudging” states and union territories to put much greater focus on output and outcome-based measurement of annual performance. He said that it is the responsibility of the state government to improve the primary health care infrastructure.

“There is a huge amount of work to be done on primary healthcare. There is a need to bring in good governance practices. There is a need to lay all our attention, all our focus and all our energy on primary healthcare. This is strictly the responsibility of state government,” Kant said.
Kant added that the next report on the states’ performance will be released in June. Apart from that NITI Aayog would also bring out a ranking of 730 district hospitals based on their performance.

Now we are on Telegram too. Follow us for updates
TAGS
Kerala Tamil Nadu healthcare Health Index report Health Index