India. Land of mysticism, myth and myriad philosophies. Also the birthplace of the zero: the void writ small, the foundation of modern math.

India. Land of mysticism, myth and myriad philosophies. Also the birthplace of the zero: the void writ small, the foundation of modern math. An epochal innovation without which the yes/no, on/off binary of all computation is impossible.

The idea of ancient India has always been informed by this parallel: the spiritual rubbing shoulders with the physical. Modern India may still be called a land of yogis (one is the top elected official of its most populated state). But in its march to modernity, India is also becoming the playground of math’s youngest products — computers, but ones that can think.

On December 29, Hyderabad-based startup H-bots Robotics unveiled a real-life Robocop. Named after Hemant Karkare, the police officer killed in the 26/11 terror attacks, this is a smart-policing robot capable of assisting the police in law and order management, monitoring security, even interacting with victims.

Robots and smart systems like these are only the proverbial tip of the iceberg called artificial intelligence (AI). The bulk of it lies beneath, unobtrusive but all-pervasive. It selects which ads you will see on social media, recognises faces and voices, even advises you on the best insurance policies available or where you can get your favourite burger.

The world over, AI (or the vast plethora of cognitive systems that fall under it), are already doing things only humans did before. Invariably, they do it better. In 2017 alone, AI systems beat the world’s best gamers, spotted an eight-planet system light years away, and even taught themselves to build more of their kind. In India, the AI march has been less spectacular but still mind-boggling. According to Intel, one in every five Indian enterprises is already using AI in some way. “This number is anticipated to soar considerably by mid-2019, with nearly 7 in 10 firms (68.6 per cent) anticipated to deploy (it),” Intel predicted.

For example, Flipkart has declared its intention to invest a substantial portion of its financial muscle in AI. It already uses these systems to gain insights into customer preferences. The possibilities are endless and Indian firms are catching on. The biggest early adopters of AI are the banking and financial sector. In a recent blog published on Forbes, Mindtree’s CFO Jagannathan Chakravarthi pointed out that AI’s “unprecedented speed, accuracy and cost efficiency” is encouraging adoption among finance and accounting firms.

“This is especially true considering the scarcity of trained workforce and investment constraints in handling increasing volumes of data.” According to PriceWaterhouseCooper, banks are already asking their IT vendors to update models to incorporate AI while building capabilities to gain intelligence on customer preferences. The same is true for other fields.

Indian startups have gotten on the bandwagon too, though their numbers and investments are still much lower than global peers. An Inc42 DataLabs report records that the number of deals in the Indian AI sector doubled in the first half of 2017 compared to the previous six months, raising around $87.85 million.

While India’s IT ecosystem has fully woken up to AI’s potential, startups are having a harder time. Crippled by a lack of ready-made talent, they are seeking succour in global firms like Facebook and Google.

Google has set up a six-month accelerator programme for AI startups, helping them connect with the “best of its people, network and advanced technologies” and scale their products. In return, Google envisions a world where these startups consume, and build solutions on top of its platforms. Always fond of acquisitions, Google in July picked up Bengaluru-based Halli Labs, a fledgling firm focussed on deep learning and machine learning systems, the hottest fields under the AI umbrella. More such acquisitions by global tech are considered a given going into 2018.

But India, with its rapidly technologising 1.3 billion plus population, is another kind of gold mine. For AI, ‘data is everything’ is not just a cliche, but a maxim. The efficiency and accuracy of AI systems are directly proportional to the quantity and quality of data available. Machine learning is entirely dependent on digital neural networks learning to make the right connections based on the data fed to them. The more data they sift, the better the network/system gets.

India already has one of the largest number of android users in the world (around 97 per cent of smartphones in India run on Android) providing Google with one of its largest sources of raw data. Facebook, for its part, boasts over 241 million users in the country. And, this veritable gold mine of data could be all the easier for Indian firms to mine.

But, data alone is not enough, points out R Chandrasekhar, president of Nasscom. “Big data doesn’t just refer to the quantity, but the tools and techniques used to make sense and draw inferences from this mountain of data. AI is one of the great tools you can use for this.” But, he says, data is related to context. “Data in India may not necessarily reflect the behaviour of people elsewhere.”

For India, AI offers countless possibilities. Just a week earlier, global IT major Accenture predicted that AI has the potential to add a whopping $957 billion to India’s GDP by 2035. However, challenges are as monumental as possibilities. The biggest is talent. For a country that churns out 1.5 million engineers a year, India has struggled with producing talent with relevant skill sets. The Talent Supply Index instituted by recruitment platform belong.co throws up interesting numbers.

For every 1,000 job opportunities, only 530 candidates are available for deep-learning roles. The number is 630 for machine learning and 710 for neuro-linguistic programming. But, the IT industry remains confident. “There are a very limited number of people who were already skilled in AI five years ago. Now, as these new skills become more relevant, the skill gap will remain. The question however is not whether we have these skills, but how quickly we can ramp up. In that, we have our game in place…,” says Chandrasekhar, referring to Nasscom’s skilling initiatives. 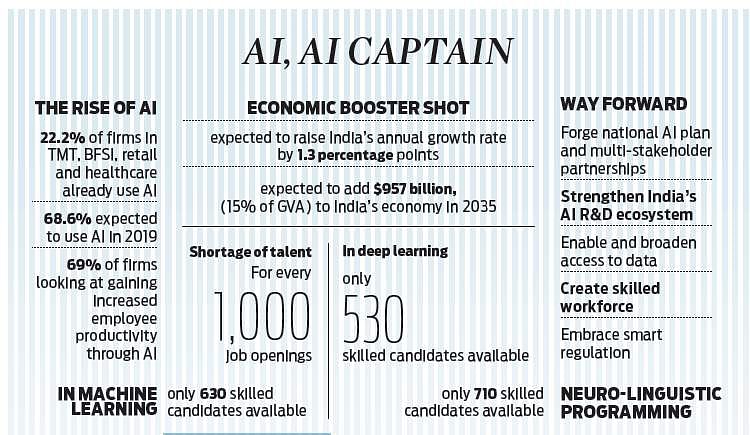