2017 was a disappointing year for the solar industry, as India struggled to meet its targets. Experts are hopeful of better fortunes in the new year, but want clarity on issues.

When the year 2017 kicked-off, it was widely seen as the make or break year for the country’s solar sector. The year took off on a happy note with successful biddings and continues fall in tariff rates. The good run, however, was a very short one. As the months progressed by, uncertainties such as the anti-dumping duty hampered growth of the segment.

The industry’s performance in the April- October period says a not so encouraging trend for the sector. By the end of October 2017, the industry achieved just 3,118 MW of ground mounted and 167 MW of rooftop solar energy against the year’s target of 10,000 MW, including 1,000 MW of rooftop. 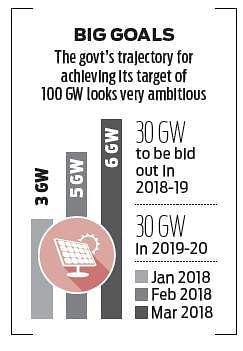 Year 2017 is likely to miss the target by a large margin (final numbers aren’t out yet), even though the capacity addition will be higher than any previous year.  To speed-up work on the ground and meet the targets, the government is now floating large projects for bidders, but a rise in project cost due to rise in panel prices and uncertainty around policies has forced the developers to wait and watch.

According to energy market tracker Mercom Capital, a total of 1,456 MW of solar power projects was tendered and 1,232 MW auctioned in the third quarter as against 3,408 MW of solar projects tendered and 2,505 MW auctioned in the second quarter. The industry is now hoping the new year to bring clarity in the sector to realize government’s final target achieving 100GW by 2022.

“The government should come out with policies that would boost the confidence of the developers. States are finding it difficult to find bidders for their projects as developers are waiting clarity on measures like reverse auction mechanism and anti-dumping duties of equipments,” Amit Kumar, partner at consulting firm PwC said to Express.

Gagan Vermani, managing director and CEO of MYSUN, a solar rooftop solutions provider said that the solar industry as whole slowed down in 2017.  “The investors want a long term policy for their investment to earn return, a thing government will have to put in place in 2018,” Vermani said, adding that the residential houses is the place where the long term growth would come from.

However, the rooftop segment has its own set of problems. Firstly, the rise of home-made companies put a serious threat on the quality of the system. Vermani said, “I personally believe there are more than 10,000 companies engaged in the rooftop business. In the long run we will see consolidation as everyone can’t assure a system that would last for 25 years.”

Kumar of PwC believes that consolidation will happen in the grid-connected solar projects segment too as it is practically impossible for every player to compete in such low bidding rates. “Like the telecom sector, very few players will survive,” Kumar said.

There are two other policy executions which will have significant impact on the sector. Firstly, how the govt is able to promote domestic production of solar equipment (panels and modules) and keep the prices of China important materials low.

There is a division in the industry as one section of solar players doesn’t want anti-dumping duty on the Chinese imports while the other section is pushing for domestic manufacturing under PM Modi’s ambitious program make-in-India.

“If the government imposes 5-10 per cent tax on Chinese imports, the developers can absorb the hike but if a 30-40 per cent tax is levied, it will have serious consequences,” Kumar said. It is important to note that 85 per cent of solar equipment requirement in the country is met through imports from China. The govt has proposed incentives in the order of `11,000 crore to promote domestic manufacturing of solar equipment. It is likely to be approved and implemented in 2018.

“Make in India not kicking off in the desired manner will see a lot of money coming in 2018 as the next year being the year of election,” another analyst said requesting anonymity. Second, government’s policy on bringing the discoms on the long argued net-metering issue will shape the rooftop segment. For every house to become a powerhouse, there needs a buyer for the power. The discoms, where the power will go from homes and commercial places has been opposing the net-metering concept for long.

“It is high time that government should start incentivizing discoms to adopt net metering as the surge in rooftop activities we have seen in recent times would just flatten again,” a rooftop player said. Central government plans to give $3.7 billion in financial assistance to the various state electricity distribution companies to adopt rooftop solar.The plan is likely to be implemented in 2018.

Rooftop segment saw a growth of nearly 100 per cent in 2017 in terms of capacity addition. At the moment, the total installed capacity is only 1.5 GW across the country, far from government’s ambitious target of 40GW by 2022. Most of the consultancy firms and industry players expect it to be between 12-16 GW by 2022.

Same goes with the large power projects where the government had aimed to achieve 60GW by the same period. The government has plans to tender 14 GW in the last three months of FY2018 and 30GW each in the next two fiscal. The industry in contrast to government’s plan remains a bit skeptical.

Khandelwal views that India should be adding between 8 to 11 GW capacity in 2018, depending upon the bids in coming three months and could target to achieve another 15 GW+ in 2019. Despite the challenges, the government is confident of achieving its targets. Power Minister R K Singh said, “The government is confident of achieving the target of 100 GW of solar power capacity by 2022.”

Will the giants enter?

A unique characteristic of the Indian solar industry is the absence of large business houses. The segment has so far being led by new comers who are backed by financial institutions. Solar industry in 2018 might see the entry of large corporate houses in 2018 as two top companies have shared their intension to enter the clean energy space.

Last week, Mukesh Ambani, Chairman of Reliance Industries said that the group can and the group will be a leading provider of clean and affordable energy. It is also reported that Baba Ramdev’s Patanjali is going to diversify into solar power equipment manufacturing. Patanjali had acquired Advance Navigation and Solar Technologies Pvt. Ltd. earlier this year and reports the company is set to invest D100 crore in its new factory in Greater Noida.

However, experts say that these developments should not be taken into face value. “Reliance has been announcing its entry in the clean energy projects for nearly a decade,” the above quoted unnamed expert said. Kumar of PwC said: “I am fairly sure this year would see many solar companies hitting decent size IPOs and raising funds.”

Now we are on Telegram too. Follow us for updates
TAGS
India solar sector solar power industry 2017