Sources claimed there was little chance of disinvestment taking place now given that the 2019 general election is approaching.

NEW DELHI: Air India failed to attract any bids even as the deadline for submission of Expression of Interest for its stake sale ended on Thursday. “As informed by the Transaction Adviser, no response has been received for the Expression of Interest floated for the strategic disinvestment of Air India. Further course of action will be decided appropriately,” said a statement from the Ministry of Civil Aviation. 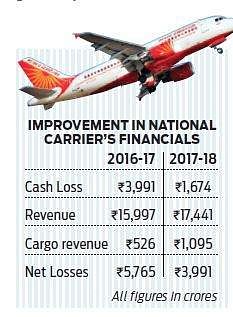 Sources claimed there was little chance of disinvestment taking place now given that the 2019 general election is approaching.

On Wednesday, civil aviation secretary RN Choubey had ruled out further extension of the deadline. To a query on whether the CBI case against AirAsia could have any negative impact on Air India divestment process since foreign investors have also been named in the FIR, Choubey had replied in the negative.

The government had earlier extended the deadline to receive initial bids for 76 per cent stake sale from May 14 to May 31.

Meanwhile, a five-member team led by Swadeshi Jagran Manch co-convener Ashwini Mahajan has come out with a plan suggesting alternative ways to revive the state-run airline.

Sources claimed there had been several meetings between Mahajan and the civil aviation minister in the last few weeks and Mahajan would present the report probably next week.

More from Business.
Now we are on Telegram too. Follow us for updates
TAGS
Air India sale Air india disinvestment