MUMBAI:  The crackdown on shell companies, which began last June, has an unexpected casualty. The number of active companies saw a de-growth of 11 per cent in FY18, probably for the first time in recent years, shows an Express analysis. Logically, reforms like GST, Insolvency and Bankruptcy Code and improved ease of doing business ranking, should lead to spurt in new firms, but the reality seems different on the ground. For example, net addition of registered companies grew a miserable 6.6 per cent in FY18, as against a healthy 25 per cent witnessed a year before. On the other hand, the number of closures (excluding shell companies) shot up 13 per cent at 44,747 in FY18 compared to 39,440 in FY17. “This could be for two reasons.

One, companies moved out due to negative impact of demonetisation, where businesses were no longer viable. Two, with GST coming in and businesses being tracked, those who used multiple names to escape the tax net reported closure,” said Madan Sabnavis, Chief Economist, Care Ratings Ltd. Latest data from the Ministry of Corporate Affairs also reveals that states like Tamil Nadu and Punjab witnessed the highest number of closures (as a percentage of total registered firms), as nearly one in every two firms wound up last year. In fact, at least six other states including Maharashtra, Madhya Pradesh, Karnataka, Kerala, Gujarat and Delhi saw closures in excess of 30 per cent of total registrations.

FY18 saw an unusual spurt in closures at 2,37,452 — largely due to the crackdown on 2.3 lakh shell firms that were struck off — as against a mere 13,814 that wound up in FY17 and 19,238 in FY16. Consequently, the fiscal year gone by, saw the number of active companies (after excluding companies under liquidation, being struck off, dormant etc) plunge to roughly 12 lakh as on April 2018 from 13 lakh the previous year. This is unlike in the past, where the number of active companies went only one way: upwards. New registrations too remained subdued at 1,09,587 in FY18 as against 1,02,723 in FY17.

According to Sabnavis, the slower pace in net additions was because the economic environment was still not conducive for businesses. “Also, there are several compliances, especially for SMEs, due to GST. Therefore, the tax avoidance possible earlier no longer is available. Therefore, fewer are interested,” he explained. Cumulatively, there are about 17 lakh registered companies as on April 2018, of which 31 per cent or 5.4 lakh closed. In other words, three out of every 10 registered firms downed shutters in the past 12 months, largely due to the crackdown on defunct firms. 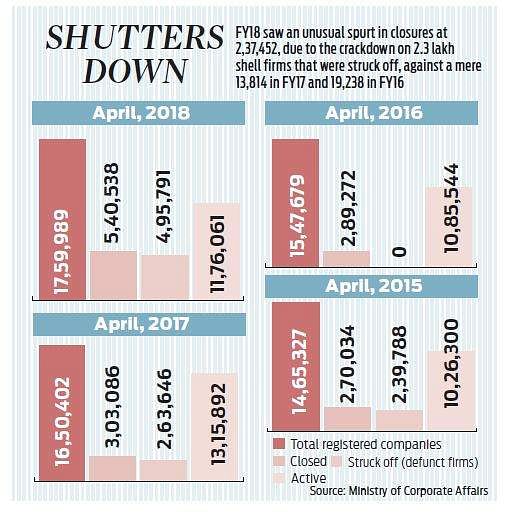