States like Kerala, TN and AP may agree to using 2011 figures if Centre agrees to the grants; states also demand raising their revenue share from 42 to 50 per cent

NEW DELHI: While southern states have been vociferously protesting the 15th Finance Commission’s terms of reference (ToR) because they stipulate using 2011 census figures for revenue sharing calculations, they may yet concede the point if the government agrees to a few special packages.
The Union government has mandated the Commission to use the 2011 census figures as a basis to calculate tax sharing and devolution of resources as against the 1971 census, which was used by earlier commissions. 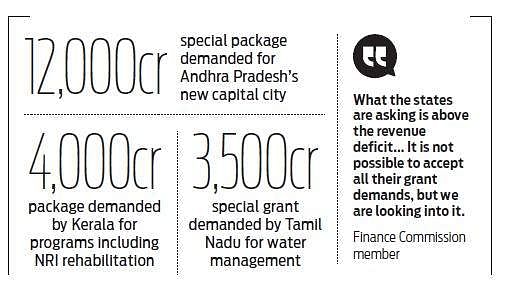 Southern states like Kerala, Tamil Nadu and Andhra Pradesh have protested the move stating that taking the more recent population data would see states that have not focused on population control getting a larger share that those that have.

“The commission is already having dialogues with these states and what has come out of it so far is that they may agree to considering census of 2011 as ToR, if the centre agrees to the demand for special packages to make up for the revenue deficit,” a senior member of the commission said.

According to the member, the finance commission will first weigh in the extra revenue demands and then discuss with the finance ministry if the arrangements are financially viable for the centre.

“What the states are asking is above the revenue deficit, which on an average will be Rs 5,000 crore for each state. It is not possible to accept all their grant demands, but we are looking into it,” the member added.
While Kerala has asked for special grants of about Rs 4,000 crore, Andhra Pradesh is seeking a special package for the new capital city Amaravati to the tune of Rs 12,000 crore. Tamil Nadu is also seeking a grant for water management projects to the tune of Rs 3,500 crore.

Sources say that these states have also demanded that the tax share from the Centre should be increased from the current 42 per cent to 50 per cent.

Meanwhile the affected states had already met the President to share their concerns, through a memorandum.

The Commission will be submitting its final report to the central government by September 2019, however before that it will discuss the outcome of its meeting with various states.