Rupee at 19-month low as crude oil prices rise again; down 30 paise against US dollar

While trade war concerns remain at the forefront with US President Donald Trump refusing to let up on tariff actions, it is the rise in crude oil prices that is set to throw a spanner into the works.

Analysts point out that while India is much better placed to deal with high oil rates this time round, the prospect of high inflation and an increased outflow of foreign funds from the markets is likely to see the Rupee depreciating further.

“The rupee extended losses owing to higher crude oil prices as well as strength in the US dollar. It is expected to extend its losses in the backdrop of further gains in crude oil price,” said ICICI Securities in a research note.

The Rupee has been facing pressure in the market since the beginning of this year. A widening current account deficit due to oil prices and portfolio outflows have been pushing the Indian currency lower. In fact, the Indian rupee has been one of Asia’s worst performers in 2018, falling by nearly 7 per cent.

And while India is better placed to deal with a large Current Account Deficit and its consequences this time around, analysts do highlight a few concerns.

“India’s wider Current Account Deficit, driven by higher oil prices and demand for capital import, will be increasingly difficult to fund, given the increased return competition posed by higher US dollar rates for emerging market debtors,” Barclays had said in a note last week.

The Rupee is also facing pressure from a mass sell-off by foreign portfolio investors, with net outflows in 2018 standing at $6.6 billion thus far.

New Delhi: Crude oil prices soared on Wednesday on the backs of a double whammy for large oil consumers like India, as US President Donald Trump pressed allies and trade partners like India to stop buying oil from Iran by November. Combined with a sharp increase in the drawing of crude oil from US inventories this week, the statement saw brent crude rise by 2.2 per cent to $78.02 (10.15 pm IST).

Iran is also India’s third largest supplier of oil and gas. The sharp increase in crisis saw shares of Indian OMCs crunch up to eight per cent on Wednesday, with Indian Oil Corporation tanking 6.18 per cent and BPCL down by 8.04 per cent. 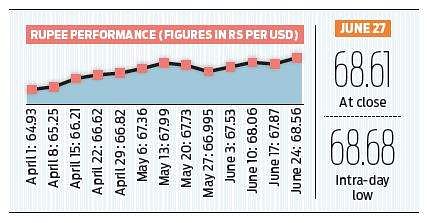 More from Business.
Now we are on Telegram too. Follow us for updates
TAGS
Rupee US Dollar