GOLD demand fell by a steep 12 per cent in the first quarter of 2018 from a year ago to 115.6 tonnes as jewellery demand dropped to the second-lowest level in ten years after local prices jumped, exag

BHUBANESWAR: GOLD demand fell by a steep 12 per cent in the first quarter of 2018 from a year ago to 115.6 tonnes as jewellery demand dropped to the second-lowest level in ten years after local prices jumped, exaggerated by a weakening rupee, World Gold Council said in a report.

“Decline in demand can be attributed to a number of factors, including the rising local gold prices, a substantial drop in the number of auspicious wedding days this year compared to the previous year, and an anticipation of an import duty cut in the budget,” WGC India Managing Director PR Somasundaram said.
Jewellery demand saw a sharp downturn, falling 12 per cent to 87.7 tonnes during the quarter from 99.2 tonnes a year ago. Imports, too, plunged by a large margin in the first quarter to 153 tonnes from 260 tonnes a year ago. 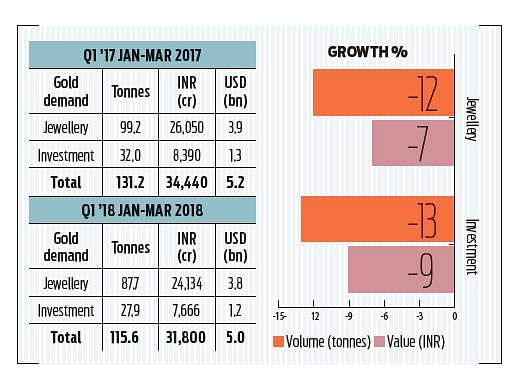 Globally, it was the weakest first quarter since the 2008 financial crisis. Gold demand fell 7 per cent to 973.5 tonnes due to a decline in demand for gold bars and gold-backed exchange-traded funds along with range-bound gold prices, according to a WGC statement. Jewellery demand, however, remained stable at 487.7 tonnes as buying in China and the US offset the weaker Indian demand.

According to Somasundaram, the transition to GST, especially by the unorganised sector, also affected demand to some extent. However, he said the government’s measures to boost rural incomes by increasing the  subsidized prices for food grains, ease of doing business under GST and the forecast of normal monsoon rains in 2018 will bolster demand in the medium term.

“The compliance standard is growing and in the long run it’s going to be positive and transform the industry,” he said, adding that the aggregate demand in April to December would be higher than last year’s three quarters.

Now we are on Telegram too. Follow us for updates
TAGS
Gold demand World Gold Council