Billionaire Mukesh Ambani-led Reliance Jio has been a runaway hit as it came, disrupted the market and even now continues to do so with its 4G network, but its spread has been uneven with faster growt

BHUBANESWAR: Billionaire Mukesh Ambani-led Reliance Jio has been a runaway hit as it came, disrupted the market and even now continues to do so with its 4G network, but its spread has been uneven with faster growth in metros and relatively slower growth in rural pockets.

Data released by regulator TRAI shows that Jio has managed to procure just 25.7 per cent of the rural market, while the shares of other incumbent operators such as Vodafone, Idea and Bharti Airtel stand at 54.01 per cent, 53.97 per cent and 50.3 per cent, respectively. Of the total 502.42 million rural subscribers as on December 31, 2017, Bharti Airtel holds the top position with 147.89 million subscribers, followed by Vodafone (114.88 million) and Idea Cellular (106.05 million). With its total subscriber base at just 41.08 million, Jio still has a long way to go before it catches up with the incumbent telcos in its rural subscriber base.

According to telecom analysts, while disruptor Jio has been mostly an urban phenomenon, other incumbents have focused on rural markets which contributed to their growth in 4G. “The early adaptors were leveraged by Jio primarily in the urban space and as incumbent operators got ready with their 4G in full scale, they focused on rural markets to look for growth,” said Faisal Kawoosa, telecom analyst at CMR Research. An analysis carried out by CMR reveals that as against 26 per cent rural subscribers using Jio 4G, incumbents had 53 per cent of their 4G subscribers added in the rural market.

However, after the Jio juggernaut rolled into the urban market quite successfully, the company came out with another disruptive ploy — a 4G feature phone, which was virtually free of cost, targeting predominantly rural feature-phone users. The chief attraction of the latest offering is that it will enable even those customers who lack a smartphone to access 4G services. The company, in order to target the 500-million strong feature phone market, is simultaneously building a sales network in rural areas.

With this, Jio’s chances of penetrating this underserved market have risen dramatically and are bound to result in a head-on collision with the existing players, who have already blamed the new entrant for the sector’s mounting debt and losses. It remains to be seen how Jio’s audacious gambit do the trick but if it succeeds, Jio network will spread like wildfire in the hinterlands. 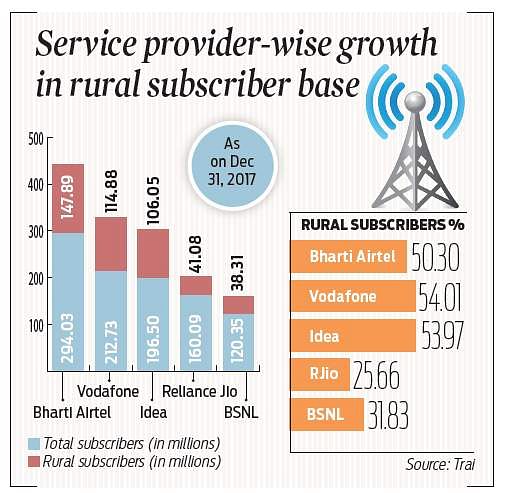 Now we are on Telegram too. Follow us for updates
TAGS
Jio rural market