India fights back import tariffs, drags US to WTO

In its representation, India said imposing import duties on steel and aluminium will impact export of these products to the US, and is against global trade norms

NEW DELHI: Challenging the recent protectionist measures of the US against Indian trade, India has dragged the US to the World Trade Organisation (WTO) over the imposition of import duties on steel and aluminium.

“We have initiated action against the imposition of import duties on steel and aluminium by the US and has sought consultations with the US under the WTO’s dispute settlement mechanism,” an official with the Directorate General of Foreign Trade told TNIE.

India, in its representation, has said that the measure of imposing import duties on steel and aluminium will impact exports of these products to the US and this is not in compliance with global trade norms.

“Such unilateral measures, on the grounds of security exceptions, are an open and blatant abuse of the WTO provisions,” India had said in an informal meeting of heads of delegations of the WTO last week.
After the filing, both India and the US can mutually try to reach an agreement by consultation. If the matter is not solved, then India can take it up to the WTO dispute settlement panel to review the matter and solve it.

On March 9, US President Donald Trump imposed a 25 per cent tariff on steel and a 10 per cent tariff on aluminium imported from all countries except Canada and Mexico. The tariff was opposed by other nations including India and China and triggered fears of a global trade war.

The US department of commerce in February found that the quantities of steel and aluminium imports “threaten to impair national security” as defined by Section 232 of the Trade Expansion Act.So far, India’s exports of steel and aluminium products to America stands at about $1.5 billion per annum. However, what sparked the row was the series of protectionist measures taken by the US against India recently.

Earlier, the US filed a dispute against India on export incentives at WTO, alleging that these subsidies harm the US players by creating an uneven playing field. It also added India to a list of countries it is monitoring for possible currency manipulation aimed at boosting exports. Currently, India’s exports to the US in 2016-17 stood at $42.21 billion, while imports were $22.3 billion. 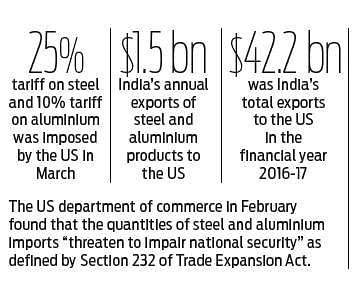 Now we are on Telegram too. Follow us for updates
TAGS
import tariffs India US trade WTO trade war steel aluminium