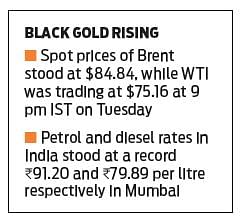 NEW DELHI: Crude oil rates continued on their steady upward march this week, with Brent crude breaching the $85 per barrel mark during Monday’s session, while US-origin WTI crude also hit a four-year high of $75.91 per barrel.

While the latter half of the session saw prices moderate, analysts expect prices to appreciate as the countdown to US sanctions on Iran continues.

The rise comes despite recent data showing that the OPEC group of oil suppliers increased production by 90,000 barrels per day (bpd) in September. However, analysts say that the market is only set to tighten further as Iran’s supply gets choked off. For instance, a Reuters survey of OPEC production found Iranian output in September fell by 100,000 bpd.

Driving prices up is the lack of confidence among investors that OPEC will be able to meet the supply shortfall from the Iran sanctions, with a research note from PVM Oil Associates stating that strengthening prices despite the OPEC supply increase “shows that the market is not convinced about the ability of the producers’ group to replace Iranian barrels.”

Analysts doubt whether Saudi Arabia, estimated to have most of the world’s spare capacity, would be able to wholly offset the Iran supply shortfall. “... this essentially leaves the world’s only swing producer powerless to prevent a supply shock and subsequent price spike in the final quarter of this year,” the note observed.

Reports also state that Russian deputy energy minister Pavel Sorokin has said that the country cannot can’t significantly increase its oil supply to Asia, where the declining supply from Iran is already having an impact.

Adding to the bullishness was US energy secretary Rick Perry’s statement ruling out releasing US reserves.

Rs 10 crores and gleaming: First made in India diesel-fired steam engine flagged off in TN

Digvijaya Singh to file nomination for post of Congress president