New launches slightly mitigated the impact on sales in the premium segment’s entry category of 250-350CC.

The continued rise in affluence of the already rich has made India one of the most attractive markets for premium and ultra-premium motorcycles in the world. But, even this segment has found itself wading through a morass over the past few quarters.

Except for a couple of new launches, the period between April-November 2019 has witnessed a widespread contraction in demand for bikes larger than 250CC. According to data released by the Society of Indian Automobile Manufacturers (SIAM), sales of motorcycles sporting engines larger than 250CC have shrunk to 4.73 lakh units from 5.84 lakh units during the same period of the previous year, recording a fall of 19 per cent year-on-year.

New launches also slightly mitigated the impact on sales in the premium segment’s entry category of 250-350CC. Here, Honda Motorcycles and Scooter India’s launch of the CB range of bikes have boosted sales for the company, going from nil units last year to 516 units this year.

Company-wise, the majority of motorcycle-makers with products in the premium and ultra premium categories have seen sales crash. If SIAM’s sales data are any indication, the impact has been more pronounced for firms operating in the ultra-premium segment. 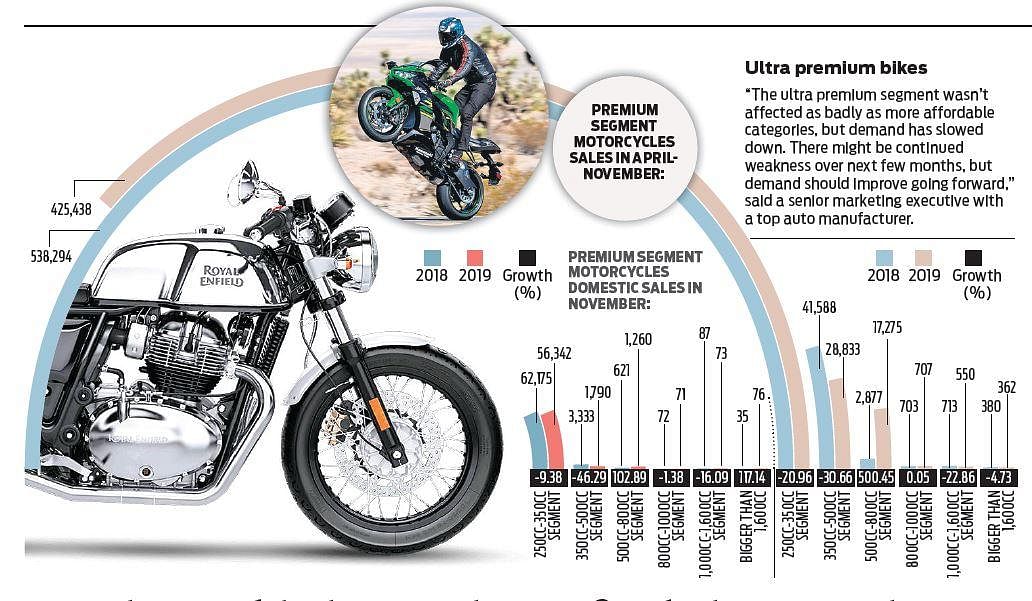 Now we are on Telegram too. Follow us for updates
TAGS
Royal Enfield