The report also finds that Indian customers are more likely to return to a brand and stick to it if they find the product quality consistent and it the brand offers them higher value for money.

Brand  loyalty, and the ability to inspire it, is a critical aspect of any product or service business. Equally important is the propensity of the market to form attachments to brands, and a KPMG report released this week shows that Indian customers are more inclined to be loyal to brands when it comes to footwear and apparels, followed by food and groceries.

They are also least loyal when it comes to choosing sportswear and liquor purchases. “For Indians, in the apparel, footwear and food, beverage, and grocery segments, it is observed that consumers are loyal to at least one retailer (physical store or website),” the report pointed out. 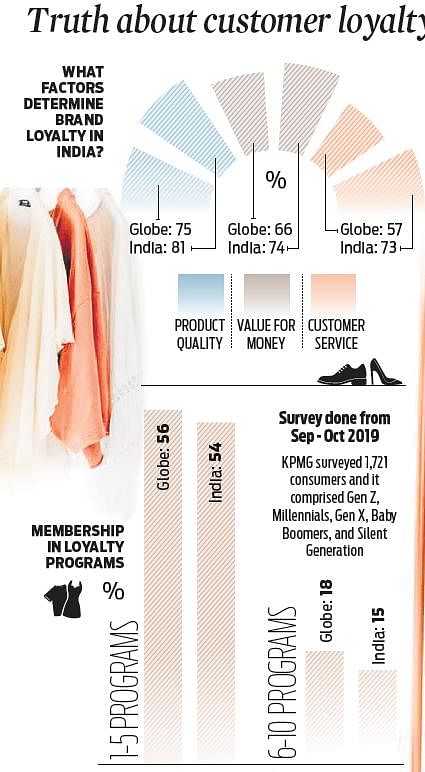 The report also finds that Indian customers are more likely to return to a brand and stick to it if they find the product quality consistent and it the brand offers them higher value for money.

The quality of customer service also figured high on the list of factors driving brand loyalty in India, 73 per cent of Indian respondents choosing it as a priority compared to the much lower 57 per cent global average.

“In almost every country, points and rewards were less likely to earn loyalty than corporate transparency and honesty,” the report noted, adding that a brand’s reputation for innovation was also cited as a factor by 43 per cent of respondents overall and by six out of ten consumers in mainland China, India and Mexico.

“Trust remains a concern: 46 per cent of respondents said familiarity or comfort influenced their loyalty, a sentiment that was particularly strong in mainland China, India and Mexico, but weaker in Belgium, Japan, the Netherlands and the UK,” KPMG said.

Now we are on Telegram too. Follow us for updates
TAGS
KPMG