HYDERABAD: The National Company Law Appellate Tribunal (NCLAT) delivered an early New Year gift to Cyrus Mistry, the ousted chairman of Tata Sons.On Wednesday, the Tribunal ended Mistry’s three-year legal battle with two key takeaways. The first, restoring him as a director on the board of Tata Sons with immediate effect. The second includes his reinstatement as executive chairman but with an interval of four weeks, during which time, Tata Sons, led by chairman emeritus Ratan Tata, is widely expected to move the Supreme Court. In that sense, Mistry’s battle will continue for a while, despite the NCLAT verdict, which Mistry hailed as a “landmark” ruling.

“It’s a moral victory for Mistry, who’s reinstated as director with immediate effect. The verdict is a victory for minority shareholders’ rights too,” Shriram Subramanian, MD, InGovern Research, told TNIE.
While the judgement largely pertains to Mistry’s ouster, which NCLAT said was illegal, his reinstatement puts focus back on the alleged mismanagement of Tata Sons. It remains unclear if Mistry will challenge some of the recent decisions taken by the board headed by N Chandrashekaran.

Tata Sons is the holding entity of Tata Group and the promoter of most Tata Group companies such as Tata Motors and Tata Steel. Mistry and family firms, which hold over 18 per cent stake in Tata Sons, alleged blatant misuse of governance norms, which effectively diluted the role of the board. For instance, in the case of Welspun Renewable-Tata Power’s acquisition, Mistry claimed that the Article 121 A was misused. The transaction with an estimated value of $1 billion needed Tata Power to raise debt. The parent entity, Tata Sons, like any other, could have only voted for or against the proposal. And though Trustee nominees originally approved the transaction, once Ratan Tata objected, “they wanted to change their view, revise the minutes, took instructions on what the minutes may contain, even left the board meeting demonstrating how majority shareholders are a super board and ignore well laid and statutorily recognised principles of law,” he argued.

Mistry had earlier made damning allegations about how Ratan Tata funded a terrorist through hawala transactions, diverting funds from AirAsia India. Also, controversial remarks about alleged favours shown by the Tata Group to Chennai-based businessman C Sivasankaran for his stake in Tata Teleservices could come back to haunt the company. 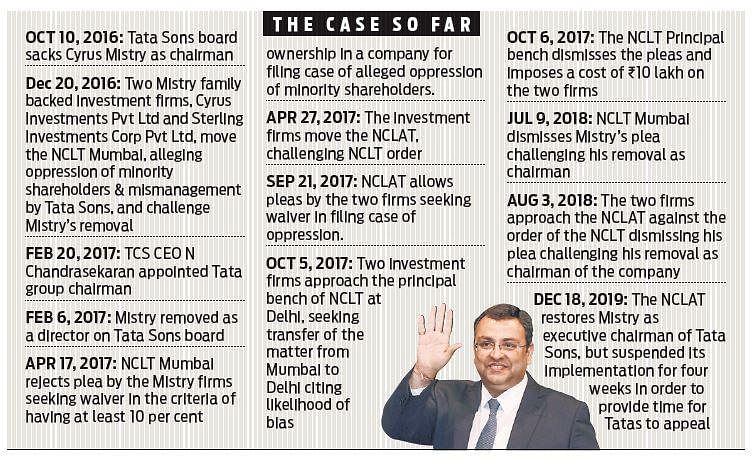 Now we are on Telegram too. Follow us for updates
TAGS
Cyrus Mistry NCLAT Tata Sons