Due to exorbitant pricing, earnings from 5G auctions unlikely to be handsome

According to the Cellular Operators’ Association of India, the price of 5G spectrum in India is 30-40 per cent higher than global rates.

At a time when the country’s debt-ridden wireless carriers are fighting a bruising tariff war, the 5G hype may fail to ignite heavy bidding for 5G airwaves rights this year, with the demand and earnings from spectrum auctions likely to remain lukewarm.

For the 700 MHz band — which went unsold in 2016 due to high starting prices — telecom regulator Telecom Regulatory Authority of India (TRAI) has suggested a 43 per cent cut, to Rs 6,568 crore a unit. To buy a 5G spectrum, an operator would need to pay at least Rs 9,840 crore as per the TRAI-mandated pricing levels as the regulator suggested that it “should be auctioned as a single band and in blocks of 20 MHz each at Rs 492 crore per MegaHertz.” 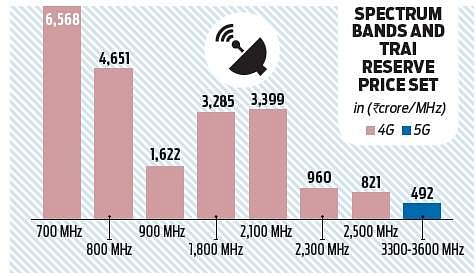 Lowering reserve prices is a move in the right direction, but they are still quite high when compared to prices in any other part of the world, reasoned incumbent telcos such as Bharti Airtel and Vodafone Idea who have expressed concerns and displeasure over the base price for spectrum auctions for the umpteenth time and so have some industry associations.

According to the Cellular Operators’ Association of India (COAI), the price of 5G spectrum in India is 30-40 per cent higher than global rates. “A majority of our operators have indicated that 5G spectrum is far too prohibitively expensive and that their balance sheets can’t afford this,” COAI director general Rajan Mathews said.

The balance sheets of operators are stressed and the scope to increase the leverage is limited, he added.
Industry executives also say that a higher base price can turn away potential bidders as previous auctions have shown that no matter how attractive the prospects for a relatively high-margin service like 5G, companies are willing to return empty-handed if the base price is too high.

T V Ramachandran, president for Broadband India Forum (BIF), said he felt that the reserve prices need to be lowered in order to ensure higher offtake and better participation from telcos. “At higher prices, almost 40 per cent of the spectrum on offer last time went unsold. Had that been used, it would have not only earned more revenue for the government but would have also boosted the economy,” Ramachandran added. Spectrum auctions, which were an important source of revenue for the government in the past, are coming at a difficult time for telecom operators.

Barring Reliance Jio, no telecom operator wants an auction this year, while Jio too recently admitted that these prices are exorbitant. Airtel also made it clear that it would not participate in an auction held at these prices and Vodafone Idea has suggested that the 5G auction should take place in 2020. All said, the auction, which is scheduled to be held at the end of this year, is expected to be the country’s largest so far, with 8,293.95 MHz of airwaves at an estimated total base price of Rs 5.77 lakh crore expected to go under the hammer. That is 3.5 times the 2,354 MHz of spectrum offered at the previous auction in 2016, for which the total base price was Rs 5.63 lakh crore.

Sources say that the Telecom Regulatory Authority of India may not go ahead with further reduction in 5G spectrum prices as the “the prices were decided only after consulting with all the stakeholders”.
If that is true, it is unlikely that the participating carriers will bid aggressively to get more.
“The sector may bleed further if pricing does not move up,” warned Kotak Institutional Equities.

Reliance Jio
Auction timeline: All airwaves should be auctioned in FY19; need bandwidth
Pricing of airwaves: Okay with TRAI pricing
Others: Govt must auction spectrum on timely basis

Bharti Airtel
Auction timeline: Staggered auction; only 4G airwaves in FY19 and 5G in FY20
Pricing of airwaves: Pricing for Sub 1 GHz needs to be reduced; 800 & 900 GHz should be at par
Others: TRAI must give pan-India reserve prices

Vodafone-Idea
Auction timeline: No auction till 2020; telcos have sufficient spectrum
Pricing of airwaves: Pricing of all airwaves need to be ‘affordable’ and ‘available’
Others: Treat telecom sector as critical enabler for digital economy