The four biggest companies of Ambani's Reliance Group still have about Rs 93900 crore of debt.

Chairman of Reliance Group Anil Ambani is planning to raise about Rs 21700 crore by selling assets from roads to radio stations in a bid to cut debt.

The breakdown is like this, according to the group spokesman:

Ambani is waging a war on debt. He said on June 11 that his Reliance Group repaid Rs 35000 crore in the past 14 months through asset disposals. But a large pile remains. The four biggest group companies still have about Rs 93900 crore of debt. And that excludes Reliance Communications Ltd., Ambani’s former flagship firm, that recently slipped into insolvency. 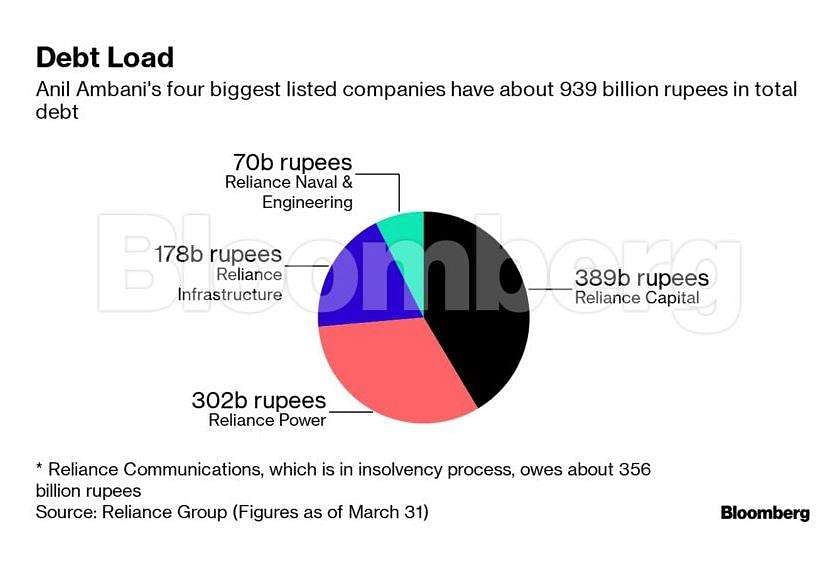 Further asset sales would help Ambani bolster the financial health of his group’s companies after a string of setbacks that included an auditor resigning at one of the firms and plunging stock prices at others. Rating cuts have also flagged credit market concerns.

Quick closure of the planned asset sales is key. CARE Ratings had pointed to delays in divestments at Reliance Capital in an April statement while cutting the financier’s rating.

“The lack of timely realizations in the asset sales is sounding alarms for most of the Anil Ambani-led companies,” said Mathew Antony, managing partner at Aditya Consulting that advises bankrupt firms on fund raising.

Reliance Infrastructure is in advanced talks to sell its nine road projects, its spokesman said. The Mumbai Metro rail operator aims to be debt-free by March 2020. It pared its consolidated debt by 45% over a year to 177.7 billion rupees as of end-March, the spokesman said. 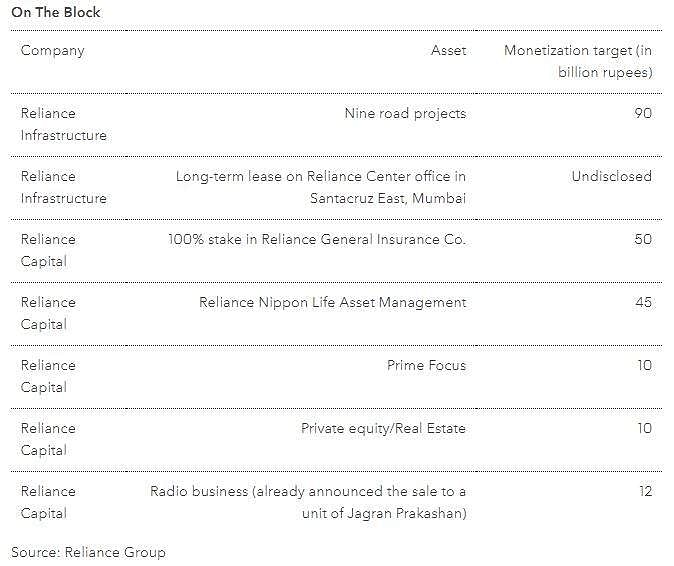 Proceeds from asset sales would help trim debt across companies and could aid in resurrecting credit ratings.

Brickwork Ratings, the latest to downgrade Reliance Capital, cut its score one notch last month. PriceWaterhouseCoopers, one of its statutory auditors, resigned in June saying that it didn’t receive satisfactory response to certain observations and transactions -- a claim the company has refuted.

Reliance Capital had “duly responded to the various queries and letters” of PWC and convened a meeting of its audit committee on June 12 to further respond to PWC’s May 14 letter, the company said. PWC’s observations were “completely baseless and unjustified” and the auditor “acted prematurely” without statutory discussions with the company’s audit committee, it said.

Reliance Power Ltd. was cut six steps in June by ICRA, which cited deteriorating finances and liquidity. Reliance Infrastructure, whose rating was dropped to D at Care Ratings last month, reported a consolidated net loss of 33.01 billion rupees for the quarter ended March.