IndiGo can't fly high with fights in the cockpit

This is the time for IndiGo to be rewarding shareholders by consolidating its leadership position and filling the gap left by Jet. Instead, the founders are busy picking fights.

The co-founders of India’s No. 1 airline are engaged in a bitter feud. Their quarrel couldn’t have come at a worse time for minority shareholders of InterGlobe Aviation Ltd., the company that owns IndiGo.

Investors were just starting to enjoy the fruits of a frenetic expansion that saw the no-frills carrier, Asia’s largest, double its capacity in the three years through March. Full-cost rival Jet Airways India Ltd. tried to keep up until it was forced to ground its last plane in April under a truckload of debt. Meanwhile, InterGlobe has put together a cash war chest - net of debt - of nearly USD 2 billion.

This is the time for IndiGo to be rewarding shareholders by consolidating its leadership position and filling the gap left by Jet, especially on overseas routes. Instead, the founders are busy picking fights. 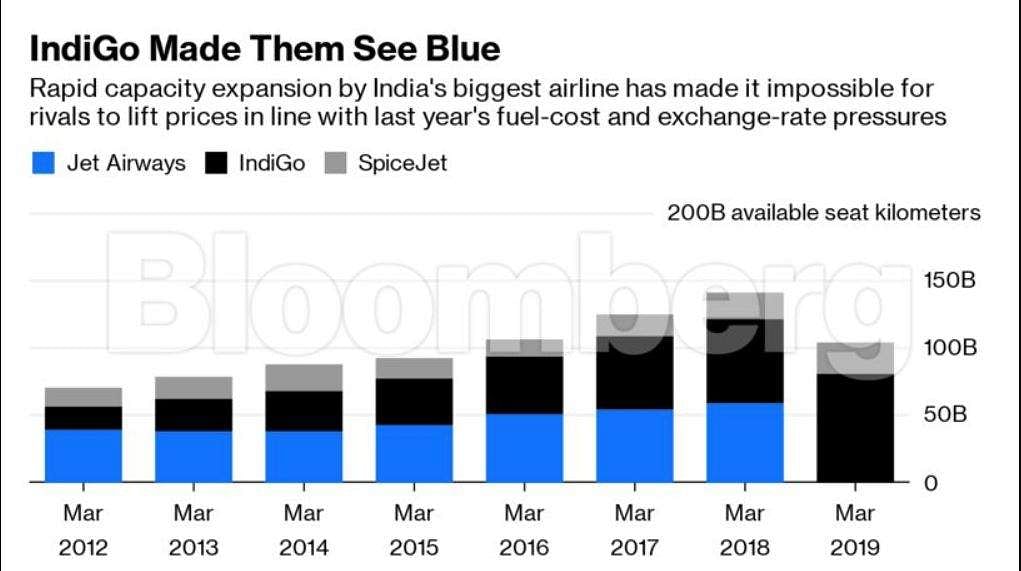 Rakesh Gangwal, a former CEO of US Airways Group Inc., has dashed off a letter to the Indian stock-market regulator alleging corporate-governance lapses. He says partner Rahul Bhatia, who owns 1 percentage point more than U.S.-based Gangwal’s 37 per cent stake, is dragging IndiGo into transactions with his other businesses, which are mostly housed under InterGlobe Enterprises Ltd. (IGE Group), without adequate auditing. The airline pays rent to IGE’s real-estate unit; the crew stays at hotels operated by Bhatia’s joint venture with Accor SA; pilots are trained at IGE’s flight simulator, a collaboration with Canada’s CAE Inc.; a Bhatia firm has also acted as a sales agent for IndiGo.

What amounted to USD 22 million of related-party transactions, for a carrier that took in USD 4 billion in annual revenue, doesn’t exactly smack of a governance scandal. Not at an airline that thrives on keeping its costs under control. Bhatia, for his part, wants to know why Gangwal is questioning the arrangements now when he “did not raise for 13 years a whisper.” The India-based partner says he took most of the economic risk when setting up the airline. Besides, Gangwal isn’t denying entering into a shareholders’ agreement that gives Bhatia control, including the power to nominate half of the six-member board and most of the top managers.

Gangwal’s letter mentions whistleblowers. Unless those charges are serious and material, the battle looks more about monetizing a business that he never wanted any part of until a persistent Bhatia talked him into it.

Today, the co-founders can be legitimately proud of IndiGo, a rare success story in global aviation, achieved in a brutally price-competitive and fast-growing market. The problem seems to be about dividing up that success fairly.

It probably rankles billionaire Gangwal, the strategy whiz, that his 37 per cent stake is perhaps worth less than the market value of roughly USD 3 billion, while his money-man (former) friend’s 38 per cent stake is worth much more. After all, any airline or a buyout firm willing to write that big a check would want a measure of influence over the airline’s future: That’s something only Bhatia can give. If that’s the real reason Gangwal is seeking to enlist the regulator’s help “to make necessary changes to the unusual controlling rights available to the IGE Group,” then it’s a failure of mediation.

From the shareholders’ perspective, it’s a dangerous lapse. Indians’ trust in business and business tycoons, finance and financiers, accounts and auditors has probably never been lower. Any suggestion of impropriety now can spiral out of control. No wonder the infighting dragged InterGlobe shares down nearly 11 per cent on Wednesday, as investors braced themselves for a protracted and unpleasant legal and public-relations skirmish - much like the one that flared up at the Tata Group in 2016 after it fired then-Chairman Cyrus Mistry, who also happened to be a large shareholder.

IndiGo became No. 1 by making flights take off and land on time more often than most other large global airlines. To investors’ horror, the messiness the carrier so studiously avoided in its operations – by relying on a single type of aircraft (the narrow-bodied Airbus), deploying its fleet efficiently and growing it strategically – has finally come back to haunt it. Not at the tarmac, but in the boardroom.

(The views, thoughts and opinions expressed in the article belong solely to the author)