Mobile applications have become major revenue generators, especially for digitally focused brands. Global revenue from mobile application sales on the two of the world’s largest app marketplaces have reached nearly $40 billion during the first half of calender year 2019, according to mobile app tracker Sensor Tower.

According to the report, Apple App Store and Google Play store combined generated total revenues to the tune of $39.7 billion during the period, registering a growth of 15.4 per cent during the period compared to the same period of last year.

“Consumers spent an estimated $25.5 billion globally on Apple’s App Store during the first half, an increase of 13.2 percent year-on-year from $22.6 billion in Q1 and Q2 of 2018. The amount generated by Apple’s platform was approximately 80 per cent greater than Google Play’s estimated gross revenue of $14.2 billion for the half. That was up 19.6 per cent Y/Y from first half 2018’s total of $11.8 billion,” the report pointed out.

Gaming applications still accounted for a majority of the revenue generated during the period, at $29.6 billion across both stores growing at 11.3 per cent. Among specific apps in the gaming segment, Honor of Kings from Tencent was the top grossing gaming app generating more than $728 million, not including China’s third-party Android stores. Other top grossing mobile apps are Fate/Grand Order from Sony Aniplex ($628 million) and Monster Strike ($566 million).

Among non-game apps, Tinder continued to be the top grosser at  $497 million, followed by video streaming app Netflix ($399 million) and  Tencent Video, which grossed $278 million outside of China’s third-party Android stores. 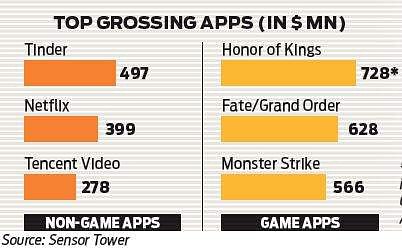 Stay up to date on all the latest Business news with The New Indian Express App. Download now
(Get the news that matters from New Indian Express on WhatsApp. Click this link and hit 'Click to Subscribe'. Follow the instructions after that.)
TAGS
App Mobile app online app