The court held that these authorities cannot be allowed now to receive their outstanding loan to Amrapali from these home buyers.

NEW DELHI:  Holding the interest of home buyers as supreme, the Supreme Court on Tuesday held Amrapali Group guilty of gross violations, observing that it diverted homebuyers’ money in contravention of the Foreign Exchange Management Act (FEMA) and foreign direct investment (FDI) norms. Cancelling all leases of Amrapali’s properties granted by Noida and Greater Noida autho-rities, besides its registration under RERA, the SC blocked Amrapali from taking up any housing project in future. 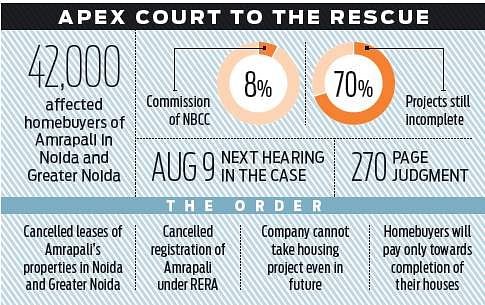 The court directed the Centre and Uttar Pradesh government to take action against it while observing that Noida authorities and banks violated the doctrine of public trust by closing their eyes towards illegal activities of the group and its officials in siphoning off money.

The court held that these authorities cannot be allowed now to receive their outstanding loan to Amrapali from these home buyers. The judgement came as a relief for 42,000 homebuyers who were left in the lurch.

The bench of Justices Arun Mishra and U U Lalit handed over all pending projects to the National Buildings Construction Corporation Limited (NBCC) which is already working on some of the projects at a commission of 8 percent as fixed by the court.

“The kind of fraud that has taken place not only in Amrapali Group but at large with more than 70 percent of various projects being delayed is alarming. The courts have to take affirmative steps with the direction to prevent such frauds, restore the money of homebuyers and to punish incumbents responsible,” the bench ordered. “They have been defrauded once and this court cannot allow them to be defrauded all over again,” said the bench as it added that bankers cannot extract their loans from the home buyers.

‘Homebuyers will not suffer due to the fault of developers’

The Supreme Court made it clear that the home buyers will pay only towards completion of their houses and they cannot be burdened with the loans Amrapali owed — either to the authorities or the banks —  and said that they can recover only from the assets of the Amrapali functionaries that stand attached under the orders of the court.The bench further ordered an investigation by the Enforcement Directorate to probe  the aspect of money laundering in the matterIt asked the Enforcement Directorate to submit periodic reports of investigation in the court, while slating a further hearing on the matter on August 9.

The judgement will have a spillover effect on other realty projects as the Supreme Court  also expanded the ambit of the Amrapali homebuyers petitions and directed the Centre to examine all pending housing projects across all states.

“The home buyers cannot be made to suffer when we are governed by law and have protective machinery. Question is of will power to extend the clutches of law to do the needful. We hope and trust that the expectations of home buyers will not be belied,” the Supreme Court said.“We are hopeful that law will spread its tentacular octave to catch all culprits responsible for such kind of fraud,” it added

Stay up to date on all the latest Business news with The New Indian Express App. Download now
TAGS
Amrapali