Modi government 2.0's budget has set too big a task for taxmen

NEW DELHI: The Finance Ministry’s stubbornness in going ahead with setting revenue targets for the current year based on a failed estimate for the previous year may turn out to be a milestone for the government, as revenue officials fear they would be unable to meet the stiff targets.

Despite provisional actual figures of revenue collections, which were far lower than the estimates available in February when the Interim Budget was finalised, North Bloc mandarins headed by former finance secretary S C Garg decided to use older inflated figures of tax collections to work out targets for the current year.

While the estimates in February had assumed that some Rs 14.84 lakh crore in net tax revenues would be collected, in reality, there was a shortfall of Rs 1.67 lakh crore, mainly on account of GST taxes that were woefully short. The provisional actual for tax collections were just Rs 13.17 lakh crore. 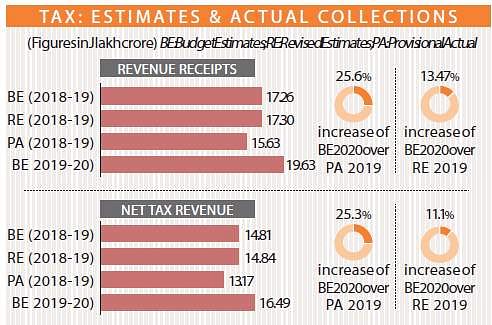 Total revenue receipts, which include both tax and non-tax revenues like disinvestment of shares and auction of airwaves, also went awry. While the estimates in February placed revenue receipts at Rs 17.30 lakh crore, the provisional actual were Rs 15.63 lakh crore, making the target, Rs 19.63 lakh crore, seem like a bridge too far, for those tasked with actually collecting revenues.

“This stubborn decision to carry on and set targets based on older inflated estimates meant that actually, targets are unrealistically high,” said top revenue officials. “A large number of new taxes such as a super-rich surcharge have been brought in. Also, taxes in other areas have been tweaked to yield more money, but these may not be enough to reach our targets.”

The government’s revenue receipts are being estimated to grow by 25.6 per cent over the last year’s actual revenues, with a massive 25.3 per cent rise in net tax revenues and a significant 27.2 per cent in non-tax revenues.

Despite the new taxes, that the budget targets would be difficult to attain is clear to most taxmen as well as economists. “Not only has an older, inflated revenue collection figure been used as base, but the nominal GDP assumed for calculating the tax mop-up is also too high,” said Dr N R Bhanumurthy of the National Institute of Public Finance & Policy.

The budget has assumed a nominal GDP growth rate, which means the real growth rate plus inflation, of 12 per cent for 2019-20, while it was just about 10 per cent in 2018-19. “We do not expect the nominal GDP growth to be over 10.5-11 per cent. The tax shortfall will also be because of an economic slowdown we are witnessing currently,” said Bhanumurthy.

India’s much-touted growth story is already unravelling with the country’s GDP dipping to an anaemic 17-quarter low of 5.8 per cent in January-March 2019. With reduced consumer spending, a slower pace of private investment and government expenditure, GDP growth last year had already dipped to a five-year low of 6.8 per cent. Automobile sales contracted by nearly 26 per cent in June, and many carmakers have announced planned shutting down of plants to produce less in the coming months. Uneven monsoon rains have added to doubts over an early economic recovery.

Officials said if revenue, especially tax targets, are not met, the government will have no choice but to do either of two things — spend less or borrow more.

The Narendra Modi government has already announced plans to borrow an unprecedented Rs 7.1 lakh crore, a further increase to that figure will also ensure that its fiscal deficit target of 3.3 per cent too will be impossible to meet.