NEW DELHI: The festive season this year has failed to bring cheer to the auto sector, which has already been reeling under a year-long slowdown.

The season usually accounts for nearly one-third of the total vehicle sales a year. 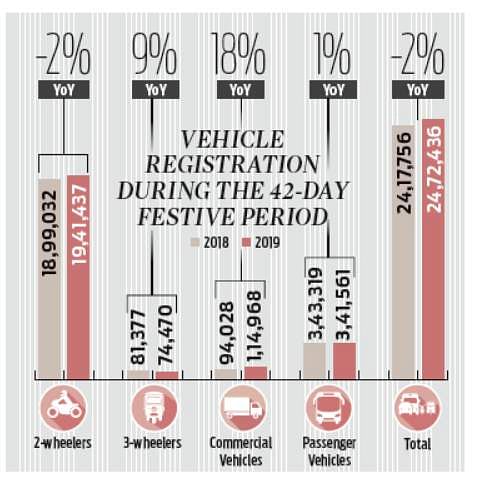 Two-wheeler sales during the period saw degrowth, dropping 2 per cent to 18,99,032 units.

While the two prime events of the season — Navratri and Diwali — stretched from October to November during last year, the two festivals fell on the same month this year. Bulk-buying in October not only boosted retail sales of PVs, but also helped wholesale dispatches to break the year-long slowdown.

“October retails were in the positive, giving a much-needed respite to the auto industry and especially our dealer community after months of degrowth. The festivals saw very good footfalls at dealerships across most of the geographies; the consumer sentiment was positive, and purchase decisions were concluded as used to be during the growth years,” said Ashish Harsharaj Kale, president, Federation of Automobile Dealers’ Associations (FADA).

Going ahead, FADA remains cautious for the near and midterms post the festive season, as BS-VI transition date approaches and rural demand is yet to pick up due to an extended and excessive monsoon. It also asked retailers to reduce inventory to avoid losses during the transition.

Inventories at dealerships in October have come down to 25-30 days for PVs, and 35-40 days for two-wheelers.

“Though not at the FADA-recommended level of 21 days, two-wheeler inventory has reduced from alarming levels,” Kale said.