Indians are going to the movies to escape slowing economy, cinema owner says

Cinemas are seeing brisk business even as India’s economy slows to a six-year low and unemployment swells, according to PVR Ltd., the nation’s largest operator of multi-screen theatres.

Cinemas are seeing brisk business even as India’s economy slows to a six-year low and unemployment swells, according to PVR Ltd., the nation’s largest operator of multi-screen theatres.

Ever since the box-office hit Kabir Singh released in June, even films with small budgets or less-recognizable actors are drawing the crowds, Kamal Gianchandani, chief executive officer at PVR Pictures, said in an interview this month. Results for July-September will “definitely surprise a lot of people,” he said, declining to elaborate.

“I think the slowdown is helping the cinema business,” Gianchandani said. “There is negativity around and people want to escape it.”

If Gianchandani’s prediction is correct, PVR would be defying a slump that has dented demand for almost everything from 7-cent cookies to cars. He joins the likes of Bollywood megastar Shahrukh Khan, who has in the past compared movies to lipstick, saying that both are immune to economic turmoil. 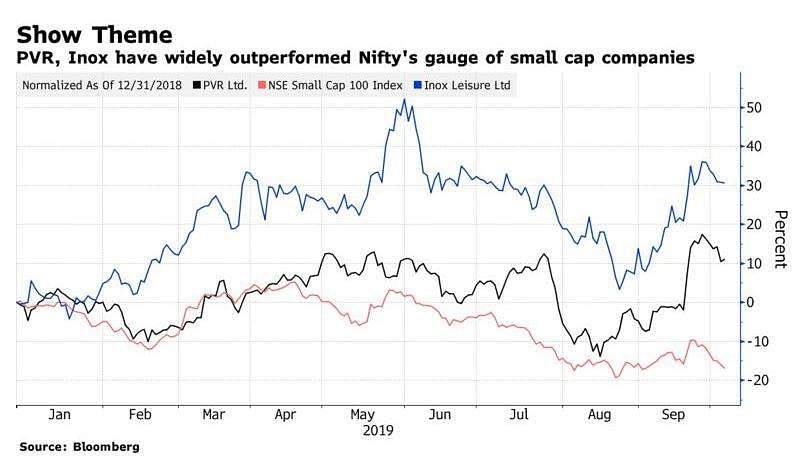 Seventeen of 26 analysts surveyed by Bloomberg have buy ratings on PVR stock, with eight holds and one sell. Similar numbers can be seen for smaller Indian rival Inox Leisure Ltd. PVR will probably outperform Inox on spending per head, analysts led by Karan Taurani at Elara Securities Pvt. said Oct. 4.

Sensing competition from the likes of Netflix Inc. and Reliance Industries Ltd.’s Jio service -- which allow people to watch movies from the comfort of their home -- PVR has partnered with Canadian motion technology player D-Box Technologies Inc. to design seats that sway and jerk in sync with the action on screen, offering a more immersive experience.

“Our strategy is to ensure we stay relevant in this age where every other day a new streaming service is being launched,” Gianchandani said. “Fortunately, customers are receptive.”

PVR’s business, which was hit by the cricket world cup in the April-June quarter, has revived since then, Gianchandani said. Footfalls, which rose about 20% in the quarter, will “remain strong,” though the economic slowdown may hurt advertising, according to a report by Edelweiss Securities Ltd. in August.

PVR is trading at an estimated price-to-earnings of 43.3 times, compared with about 21 for China’s Wanda Film Holding Co.

“It is not just the content. There is something else at play that is aiding the film business,” Gianchandani said. “I won’t say we are happy with the slowdown, but we have no complaints because the business is doing well.”

Excerpts from the interview:

Stay up to date on all the latest Business news with The New Indian Express App. Download now
(Get the news that matters from New Indian Express on WhatsApp. Click this link and hit 'Click to Subscribe'. Follow the instructions after that.)
TAGS
movies economic slowdown PVR