The fallout from the shadow finance crisis becomes more serious after Indiabulls is denied a lifeline by the Reserve Bank of India.

The contagion risk from India’s year-old shadow banking crisis has suddenly turned much graver. What investors don’t know yet is whether the new problem is a $4 billion headache, a $16 billion migraine, or a life-threatening tumor.

On Wednesday evening, the Reserve Bank of India quashed a proposed merger of Indiabulls Housing Finance Ltd., one of the country’s largest real-estate lenders, with Lakshmi Vilas Bank Ltd.

A marriage with a deposit-taking institution would have given much-needed relief to a shadow bank like Indiabulls, which has to support $16 billion in mortgages, advances against property, commercial real estate and other such hard-to-liquidate, long-term assets with loans from banks and the money market.

That’s become increasingly difficult and expensive since the unexpected collapse in September last year of IL&FS Group, an infrastructure operator and financier. Meanwhile, the more immediate contagion risk comes from the $4 billion that the Indiabulls Group, which includes the housing finance company, owes the Indian banking system.

The importance of a steady depositor base can be gauged by the single-day, 34% slide in Indiabulls Housing’s shares late last month. That came after the central bank put Lakshmi Vilas under its correctional facility for weak banks, and a court agreed to hear a plea seeking a fraud investigation into the property lender group, raising doubts about the merger.

As panic spread, Yes Bank Ltd. and IndusInd Bank Ltd. issued statements saying their exposure was secured by assets. That was bravado, plain and simple. Money is the only raw material for a financier, as well as its only finished product. Without new funding at a reasonable price, how can the group keep going, and for how long? Now that Indiabulls has been denied a chance to become a bank, which lender or asset manger will take the risk of lending it more money?

Puzzlingly, Indiabulls announced that on Oct. 14 its board will consider a share buyback. This demonstration of liquidity will do little to calm a nervous market. It’s well known that Indiabulls has cash; the group has been selling assets to deleverage. The company ought to be shoring up capital at this critical moment rather than reducing it. It’s unclear how lenders, rating agencies and regulators will view a decision to spend this precious cash.

In July, Crisil, an Indian affiliate of S&P Global Inc., cited Indiabulls’ $4 billion cash hoard as of June, its “robust” capitalization and strong profitability as positives in a challenging operating environment. The RBI’s veto changes all that, and sends out three key signals. 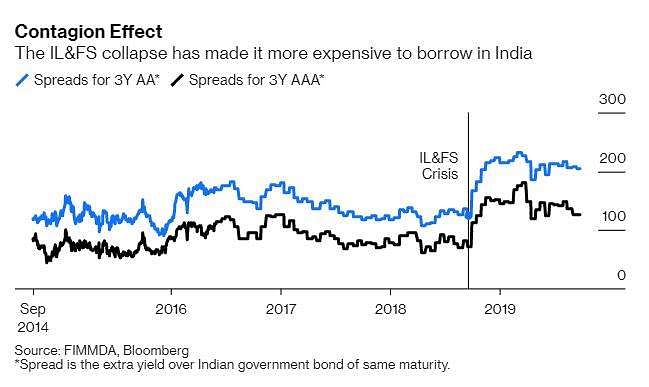 The first message is aimed at other shadow banks trying to reach safety by acquiring a bank. If they have anything to do with India’s murky property market, it’s probably not even worth trying.

The second memo is to banks: Their credibility with depositors and investors is their problem. Analysts estimate that a fifth of Yes Bank’s net worth is tied to its exposure to Indiabulls Group. CEO Ravneet Gill has been trying to raise equity and steady the lender, which has been ravaged by bad loans racked up by his predecessor. But which new owner will want to get singed?

The central bank’s “no” to Indiabulls will undoubtedly worsen the climate of fear in India’s financial industry. The RBI also has to worry about its own reputation. That’s taken a beating since the now-ousted CEO of Punjab & Maharashtra Cooperative Bank Ltd. gave a scandalous account of how he hid bad loans to a shanty-town redeveloper from the central bank. The cost of inadequate supervision in that case has fallen on depositors, who’ve been hit with withdrawal limits.

Taxpayers have already shouldered the burden of a $200 billion bad loan problem at India’s conventional banks. As the trouble engulfs more non-bank financiers, they can expect to be called on to do more. The bill can’t be sent to the depositors. That’s the third, and most important, message.