Auto firms set for a downhill stride in Q2

July-September is expected to be one of the worst quarters in a decade with pressure across segments, as OEMs focused on inventory reduction.

With vehicle sales hitting new lows and most automakers cutting down production to keep inventory levels at check, the profits and revenues of a majority of automobile companies are expected to drop in double-digit figures during the second quarter of the financial year 2019-20, say analysts.

In a recent note, brokerage house Prabhudas Lilladher said the inventory correction and production cuts during the second quarter of the fiscal have led to sharp decline in volumes across segments and will continue to dent financial performance of auto firms. 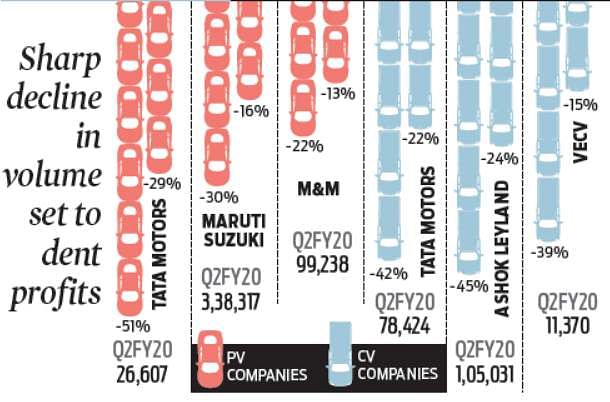 Likewise, analysts at Motilal Oswal said Q2FY20 is expected to be one of the worst quarters in a decade with pressure across segments, as  OEMs focused aggressively on cutting inventory.

It said 12-16 companies are expected to report a PAT decline, while Tata Motors is expected to post loss.

Analysts at the firm also expects Bajaj Auto and TVS to deliver stable sequential margins, but is of the view that Maruti Suzuki, Ashok Leyland, Tata Motors and Eicher Motors are likely to be worst impacted by the slump in auto sector, with margins dropping up to 750 basis points.

Prabhudas Lilladher said it expects Bajaj Auto to be the only OEM to see margin expansion quarter-on-quarter (QoQ).

Despite almost all the carmakers offering huge discounts during the ongoing festival season, dispatches by OEMs in September was weak.

Now we are on Telegram too. Follow us for updates
TAGS
Automobile firms Automobile industry Economic slowdown