Net errors and omissions is a category present in balance of payments accounting to reflect flows that can’t be explained elsewhere.

China’s hidden capital flight surged to a record high in the first half of this year, suggesting that residents wanting to move money abroad are using unrecorded transactions to evade tight capital controls.

That’s according to the Washington-based Institute of International Finance, which said the “net errors & omissions” in China’s balance of payments, widely seen as an indicator of concealed capital flight, rose to a record high of $131 billion in the first six months of this year. That was larger than the average $80 billion recorded during the same period in 2015 and 2016, when outflow pressures intensified, it said.

“Resident capital continued to leave the country via unrecorded transactions,” said the IIF’s head of China research Gene Ma in an Oct. 10 note. While recorded resident outflows of $74 billion were the smallest in 10 years, “the true extent of capital flight seems underreported,” Ma wrote.

Net errors and omissions is a category present in balance of payments accounting to reflect flows that can’t be explained elsewhere. Discrepancies in tourism data can also be used to spot the practice of citizens using activities like property purchases or buying life insurance abroad to squirrel money offshore.

A separate Bloomberg measure estimating capital flows showed outflows were about $226 billion in the first seven months of this year, about 19% higher than in the same period in 2018. 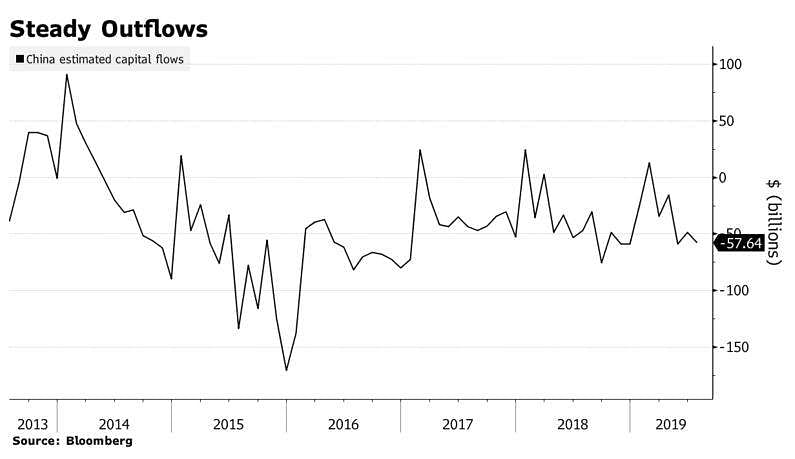 While growth concerns will weigh on China’s outlook next year, Ma expects relatively balanced net flows in 2020. China’s inclusion in global stock indexes and its phased inclusion in global bond indexes from next year will continue to drive significant portfolio inflows, while the State Administration of Foreign Exchange is committed to continue financial market opening, he said.

Now we are on Telegram too. Follow us for updates
TAGS
China Yuan