Is the world economy sliding into first recession since 2009?

The IMF’s new boss, Kristalina Georgieva, sees a 'serious risk' the slowdown will spread, and on Tuesday it’s likely to cut its 2019 global growth forecast from 3.2%, already the weakest since 2009.

The global economy is wobbling and whether it topples over is the big question in financial markets, executive suites and the corridors of power.

Investors cheered Friday as the US struck a partial trade agreement with China and there were even signs the U.K. may strike a divorce deal with the European Union. But the debate over how close the world is to its first recession since 2009 may soon start swirling again.

OPINION | As growth dips, are we stepping into a long, dark winter?

There will certainly be discussions this week at the International Monetary Fund’s annual meeting in Washington. Bloomberg Economics’ global GDP tracker shows the pace of expansion has slowed to 2.2% in the third quarter, down from 4.7% at the start of 2018. 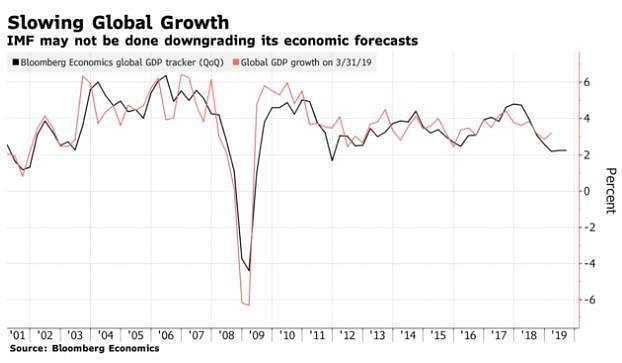 The IMF’s new boss, Kristalina Georgieva, sees a “serious risk” the slowdown will spread, and on Tuesday it’s likely to cut its 2019 global growth forecast from 3.2%, already the weakest since 2009.

Bond traders are certainly concerned -- $14 trillion of bonds are yielding negative rates. By contrast, equity investors have sent the MSCI World Index up 14% this year.

ALSO READ | Sure signal of worldwide recession being months away, but is India prepared?

With Tom Orlik, chief economist at Bloomberg Economics, saying “a lot needs to go right” for the world to dodge a major slowdown, here are the arguments for and against worrying about a global recession in 2020.

President Donald Trump’s 18-month trade clash with Chinese leader Xi Jinping has already put global growth under pressure. There was a breakthrough on Friday though with Beijing signing up to buy more American farm products and the White House suspending another round of tariffs. But the thorniest disputes remain outstanding and some duties remain in place. US goals in the trade war center around accusations of intellectual-property theft, forced technology transfer and complaints about Chinese industrial subsidies. Trump could also still impose levies on European auto manufacturers. 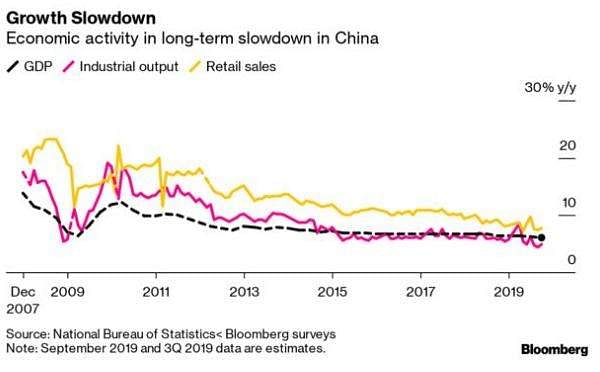 Undoubtedly manufacturers have been the biggest trade-war victims, and global activity has contracted for five straight months. Of particular concern is the ailing automobile sector -- a headache for the export-heavy German and Japanese economies. Businesses are cutting back, and US non-residential investment shrank in the second quarter for the first time in three years. The question is whether the pain at factories infects services, adding another element to the slump. 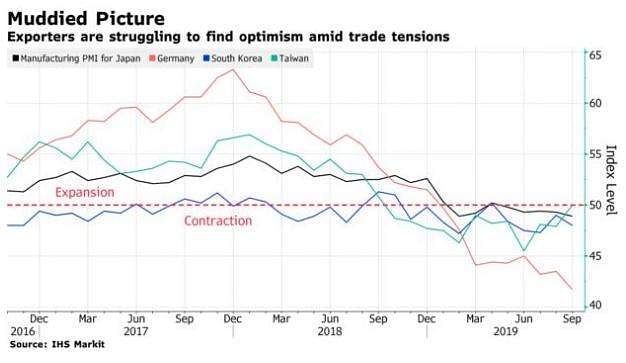 As well as the US -China skirmish, the U.K. and EU have yet to seal a Brexit deal. The US is at odds with Iran after a drone attack on Saudi Arabian oil fields and an Iranian oil tanker caught fire after an explosion near the Saudi Arabian port of Jeddah on Friday. That risks a jump in oil prices. Protests in Iraq have turned violent, Turkey launched an offensive in Syria and marches in Hong Kong might tip that economy into recession. Argentina is facing another fiscal crisis and looks likely to oust a market-friendly government, and Ecuador, Peru and Venezuela also have political problems. An impeachment probe into Trump as well as the 2020 election campaign could also prompt him to ramp up his anti-globalization agenda. 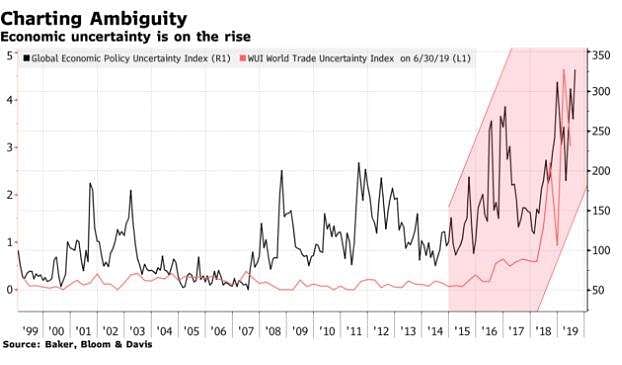 Profits Pinched
Global profit growth stalled in the second quarter, depressing business confidence and leading to cutbacks in capital spending worldwide. Behind the earnings squeeze: rising worker wages, lackluster productivity growth and a general lack of pricing power. The danger is that profit-pinched corporations will next take the chop to their work forces, knocking consumer confidence and spending for a loop.

Squeezed Central Banks
Monetary policy may be easier than at the start of the year, but central banks lack ammunition and in some cases may have been too slow to act. The Federal Reserve has cut its benchmark rate by about 500 basis points in all three recessions since the early 1990s, yet it began this year with only half that amount available. The European Central Bank and Bank of Japan are already running negative rates with doubts about how much further they can go.

Reluctant Governments
The IMF is among those urging governments to loosen budgets, but the signs are that fiscal policy will be reactive not pro-active. Although Morgan Stanley estimates the primary fiscal deficit has risen to 3.5% of gross domestic product in major economies from 2.4% last year, it sees it increasing only to 3.6% next year. Some governments are spending more, but China and Germany, both of which have room for fiscal stimulus, are holding back and Japan just raised its sales tax.

REASONS NOT TO WORRY

A model created by Bloomberg Economics puts the risk of a US recession next year at just 25%, and if the world’s biggest economy can stay upright that should help offset problems elsewhere. There’s also hope that the so-called stall speed at which a recession becomes almost guaranteed is lower than it once was for the US, meaning it can bump along at pace of around 1.5%. The US is also more closed an economy than others, meaning it should be able to carry on expanding even if global commerce takes a hit. 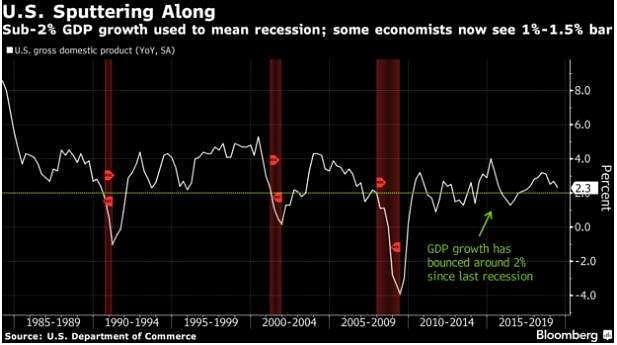 Hiring Sprees
The American consumer has remained a pillar of growth in part because of the lowest unemployment rate in five decades. While the US labor market has shown signs of easing, it should continue to support household spending. Hiring sprees elsewhere have also helped and the Conference Board reported this week that its index of global consumer confidence remains near a record high. 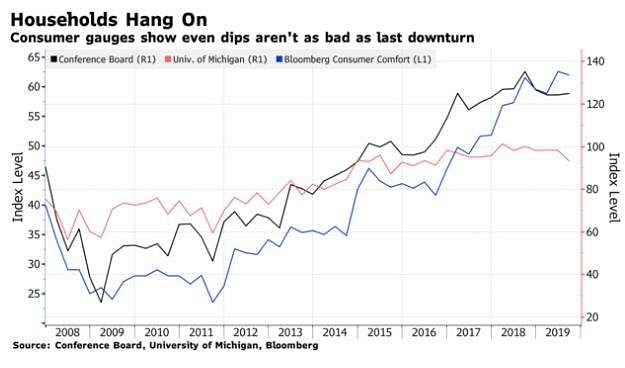 Central Banks Acting
The Fed has cut interest rates twice this year and may do so again this month, while the ECB has pushed its deposit rate further below zero and relaunched its bond-buying program.

The Bank of Japan is also considering doing more. They’re not alone, with counterparts in India, Australia, South Korea, South Africa and Brazil among those also trimming their benchmarks. Monetary policy takes time to work, but should provide some support. 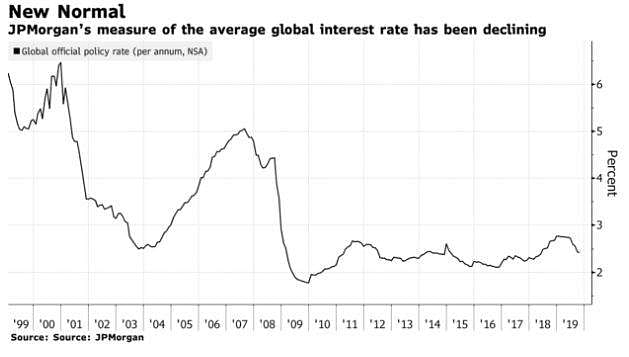 China
China may not be racing to the rescue as it did in previous slumps because of concern doing so would inflate debt levels, but it can still shift if needed. It’s already cut the amount of cash banks must hold in reserve to the lowest since 2007. Infrastructure spending by local governments is expected to tick higher and state investment also could surprise on the upside.

Fewer Excesses
Prior slumps were driven by a correction of excesses such as the run-up in inflation in the 1980s, the bursting of the technology bubble in the US at the start of this century or the collapse of housing a decade later. This time around, inflation is generally weak and while stock prices are elevated they are arguably not in bubble territory. Although home prices in Canada and New Zealand are frothy, households in many economies have cut back leverage.