As the morning office hour rush begins, Raju, whose family has owned a kirana store for five decades, gets set for business. The near 200 sq ft Raju Stores, which has stocked up more than 1,000 items, typifies the mom-and-pop stores that are ubiquitous around the country. The interiors had been dim and disorganised, billing was ad hoc and most transactions were in cash. Now however, the store has undergone a transformation, rendering it nearly unrecognisable for long-time customers. Trying to keep pace with change, Raju decided to sign up with Metro for its point-of-sale machine to hand out digital bills and also learned to accept Paytm payments. This helped piece together a list of 1,000 customers to whom he could push special offers. 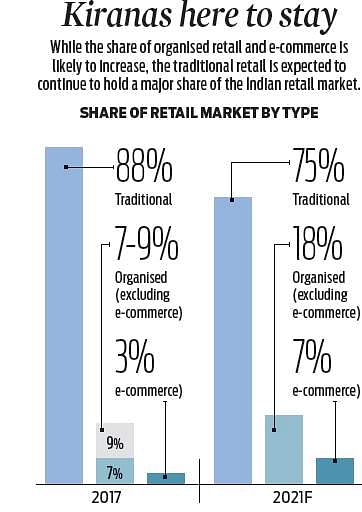 There are an estimated 12 million such small retailers in every nook and corner of the country. They are now the focus of two transformational forces — one that seeks to modernise them using technology in a bid to bestow the efficiencies and tactics of modern retail; the other that seeks to make them the pulsating nerve centres of the e-commerce and digital payments revolution focused around smaller cities.

While fintech firms such as Paytm and Google Pay are jostling to become the payment bridge between the store and the customer, companies such as Reliance, Metro and Amazon have plans to make kirana stores a big part of their grocery and daily-needs e-commerce business and also as delivery hubs and pick-up points for other goods.

Nevertheless, while modern stores, along with e-commerce firms, are striving for the largest share of the retail pie, traditional retailers still hold a major landscape in India. “The industry is expected to grow exponentially to reach $1,200 billion by 2021, of which traditional retail holding is 75 per cent share of the total market, followed by organised (18 per cent) and e-commerce (7 per cent),” pointed out Rajat Wahi, partner at Deloitte, quoting the report Evolve for Consumer.

“Local grocery shops (kiranas) shall remain relevant as they offer good services to their customers, provide a handy credit facility to them and have built a relationship with them over time,” said Arvind Mediratta, MD & CEO, Metro Cash & Carry India. However, they need support in modernisation and digitalisation of their stores, he added. “We are tying up with firms to remodel traditional retail stores. Currently most kirana stores have a closed-door format and we are encouraging them to have an open format like that of supermarkets where customers can enter their stores,” he said.

While the share of traditional retail is shrinking and e-tailers are seeing theirs getting fatter, the former will continue dominating in the foreseeable future with locational proximity, local community knowledge and personal relations with customers fuelling their growth, Wahi said. This reinforces that kiranas are here to stay.

Perks of remodelling
Conversion of kiranas to an open format like that of supermarkets takes only 48 hours, said Arvind Mediratta of Metro Cash & Carry. “We have seen sales go up by 30% in such stores after conversion, even at places like Bengaluru and Hydera-bad where e-commerce penetration is very high.”

Lack of capital to improve ambience

Getting the right merchandise mix

Too many returns making reverse logistics an issue

Now we are on Telegram too. Follow us for updates
TAGS
Kirana stores Mom and pop stores