Costlier veggies push up WPI inflation to 2.59 per cent

Economists have already warned of the economy slipping into stagflation, which indicates low growth and high inflation.

NEW DELHI: The Wholesale Price Index (WPI) based inflation surged to an eight-month high of 2.59 per cent in December 2019, against 0.58 per cent in November, on account of sharp rise in prices of food articles like onion and potato.WPI was at 3.46 per cent during December 2018.

Among food articles, vegetable prices rose 69.69 per cent mainly on account of onion, which saw 455.83 per cent jump in prices, followed by potato at 44.97 per cent. 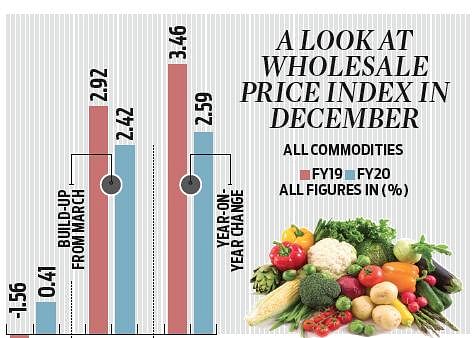 Onion prices ruled above Rs 100 per kg till recently, owing mainly to excessive rains damaging crops. The prices have started to move southwards now with the arrival of fresh crop as well as imports.

For manufactured products, the wholesale inflation cooled marginally (- 0.25 per cent) during December. As a category, fuel and power too continued to show deflationary trend at -1.46 per cent, against -7.32 per cent a month ago.

The rate of price rise in primary articles as a grouping rose to 11.46 per cent from 7.68 per cent a month earlier. The Consumer Price Index (CPI) based retail inflation, as per the data released on Monday, spiked to over a five-year high of 7.35 per cent in December due to costlier food products.

“We now expect the inflation to breach 8 per cent in January and then start bottoming out. This jump in inflation will, perforce, make the RBI take a relook at the inflation trajectory, but in our view, any change to a possible change in stance could be unwarranted as we find compelling evidence of significant slowdown in discretionary consumption,” SBI Economic Research Department said in a report.

Economists have already warned of the economy slipping into stagflation, which indicates low growth and high inflation. This will force RBI to press a pause button in the next monetary policy meet.

Stay up to date on all the latest Business news with The New Indian Express App. Download now
(Get the news that matters from New Indian Express on WhatsApp. Click this link and hit 'Click to Subscribe'. Follow the instructions after that.)
TAGS
WPI inflation Wholesale Price Index inflation