NEW DELHI:  India continued to chip away at its mammoth trade deficit with China, government data showed on Thursday, with the number falling from over $53 billion in fiscal year 2018-19 to $48.66 billion in 2019-20. The reduction in trade deficit has primarily been driven by a fall in India’s imports from the northern neighbour, even as India’s exports to the country managed to hold their levels. 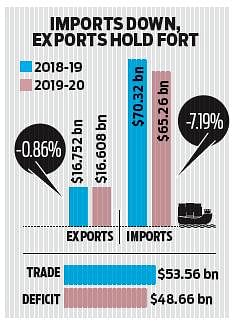 Over this period, the Centre has taken steps to reduce import dependence in several segments and imposed a series of anti-dumping duties to protect local manufacturing. China accounts for about 14 per cent of India’s imports and is a major supplier for sectors like mobile phones, telecom, power, plastic toys, and critical pharma ingredients.151.56 million). Over 50 quality control orders (QCOs) and other technical regulations have been notified in the past one year including on electronic goods, toys, air conditioners, bicycle parts, chemicals, safety glass, pressure cooker, items of steel, electrical items, etc.

Stay up to date on all the latest Business news with The New Indian Express App. Download now
TAGS
trade deficit China USD