NEW DELHI: A two-third of workers in urban areas, mostly self-employed or employed in informal sectors, have  lost their jobs due to the lockdown imposed to contain the spread of coronavirus, showed a survey conducted by Azim Premji University.

According to the survey, livelihoods are destroyed as a result of the slowdown, while the lockdown resulted in households becoming extremely vulnerable and food-insecure, and relief measures are grossly inadequate in reducing the pain. 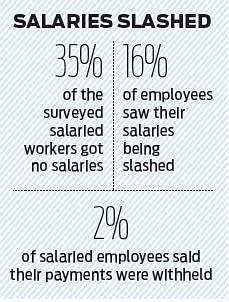 The survey found that half of the salaried workers were either not paid or saw reduction in salaries: 35 per cent got no salaries, 16 per cent got reduced salaries, while 2 per cent had salaries withheld.A two-third of workers, or an overall 67 per cent, have lost employment: 57 per cent jobs were lost in rural areas and 80 per cent in urban areas.

The survey finds that the weekly earnings of casual wage workers have been halved from Rs 938 in the pre-lockdown period to Rs 482 during lockdown, leading to a drop in earnings of Rs 456 a week.

In addition, the weekly earnings of non-agricultural, self-employed persons have vanished. While the earnings were Rs 2,385 in the pre-lockdown period, they are left with only Rs 218 during lockdown, a massive drop of Rs 2,167 a week.

Even for farmers, only 12 per cent of them could harvest and sell at regular or higher prices.On the impact on households, the survey found that eight in 10 are unable to pay rent and 37 per cent reported having to take loans to cover the expenses during the lockdown.

Now we are on Telegram too. Follow us for updates
TAGS
coronavirus COVID19 Lockdown Azim Premji University