The relation and compound effect of consistent economic growth, physical and social infrastructure investment and focus on rural development etc. represents a key to employment creation.

Balancing populism with a growth agenda in an election year can be an arduous task, and clearly, the incumbent government has tried hard to address both the agendas while delivering the interim budget. While it would seem that they are trying to focus on all segments of the electorate — the lean clearly was towards farmers, MSMEs, which was expected.

Given it was an interim budget — a lot of specifics were omitted — so the specific actions which we were expecting in the area of employment, employability and employment were not addressed. We hope they do get addressed in the budget that will be presented post the general elections.Having said this, I do believe it was a growth-centric and development-centric budget. It reiterates the various avenues for job creation and formalization of jobs and there is ample evidence in the budget that it will help sustain and drive growth and spur the economy. 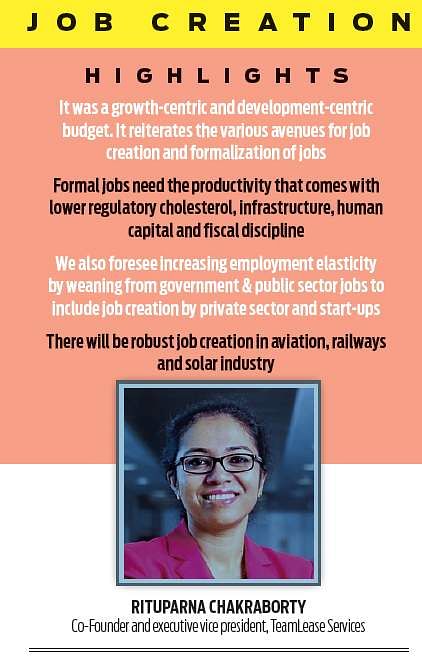 The relation and compound effect of consistent economic growth, physical and social infrastructure investment and focus on rural development etc. represents a key to employment creation. India’s problem is not jobs, but formal jobs. And formal jobs need the productivity that comes with lower regulatory cholesterol, infrastructure, human capital and fiscal discipline.

We also foresee increasing employment elasticity by weaning from government & public sector jobs to include and acknowledge job creation by the private sector and start-ups. Several other structural transformations, which is key to growth of trade, commerce and economy, has got due recognition. Pradhan Mantri Gram Sadak Yojna has got an allocation of `19,000 crores; Railways `1.58 lakh crore, 8% more than `1.48 lakh crore last fiscal and the Sagarmala Project — on coastline and inland waterways development — has also been given focus.

Domestic aviation continues to be a priority, as 100+ airports are operational. All of these will lead to robust job growth particularly in aviation, railways and new age opportunities in the solar industry to name a few. This will move the needle substantially for job creation and is good for the economy.

The growth and formalisation of the economy with GST has led to an increase in employment opportunities as shown in the increase of nearly 2 crore additional EPFO subscribers over the past two years. In addition, government’s focus on simplifying GST and tax administration, internal trade, infrastructure and the MSME sector, simplification of compliance will accelerate job growth. Domestic Trade — now DIPP — Department of Industrial promotion — will now focus on domestic trade and services to be renamed as the department for the promotion of Industry and Internal trade, which will further boost the agenda. The budget has a pro-labour outlook.

Stay up to date on all the latest Union Budget news with The New Indian Express App. Download now