With his AI invention, a plant will be able to tell you that it’s thirsty and could do better with looser soil in the pot.

BENGALURU: Destiny is what Rishi Bhatnagar credits his chance meeting with Bengaluru-based Random Hacks of Kindness, following which he built an AI interface that was showcased during South By South Lawn at the White House. The festival was the brainchild of US President Barack Obama during his last couple of months at the White House.

Rishi built the interface for PolyBot – a customisable hydroponic growing system, where temperature, light cycle, water level, and nutrients are yours to control. His interface allows schoolchildren to interact with the plant growing bot giving the PolyBot and essentially the plant, a personality.
“I have learned from my own experiences while mentoring students that they learn the best through stories,” he says. 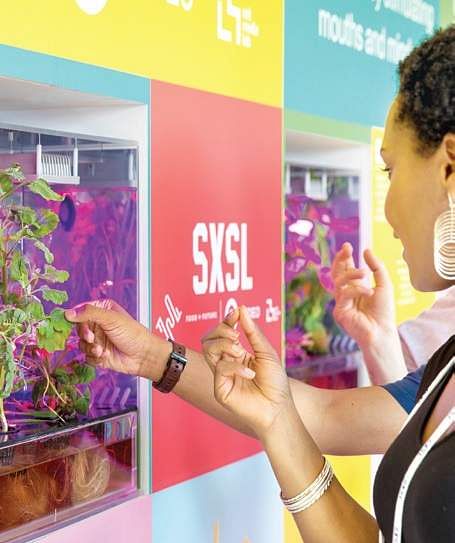 The children can interact with bot like they were interacting with another human, or in this case, a bee called Dr Buzz. This interface is powered by an Artificial Intelligence or AI that learns what the kids are asking and responds to them in real time from its knowledge base that only grows with time.

This interface will allow the schools across Boston and Minneapolis in the USA to interactively learn and ‘grow with the plants’ that grow inside the polybot, in the next couple of months, as a part of their curriculum.

“Imagine being able to talk to a plant. How would a 10-year-old feel if this plant in her classroom could tell her that it was thirsty? Or had too much water and no air, or if it needed something to be added in its soil. How would she feel if the plant could tell her stories about its significance in history and culture? If a Basil plant could tell the student why it is considered holy and sacred in some parts of the world and what makes it such an integral part of a culture! If I were a 10-year-old, I would have wanted the education that way,” says the 25-year-old.

The project was built under the Food Future Colab, which is a venture set up by Target, MIT and Ideo at Cambridge, Massachusetts.

Rishi’s AI interface in the PolyBot is used to  understand what the students are saying and reply to them with relevant answers and stories that complement them in their learning journey.

“We source the data from two buckets- a) Google, Wikipedia and b) through an Algorithm written to stitch stories around the Google links that pop up when you run a search for the queries online,” explains Rishi.

The  engineer at the Strategy and Innovation team at Target has been experimenting with tools and techniques of AI for a few months now. “While some say the future of AI is a threat to human civilisation, I believe that anything that is beyond the understanding of a person is going to be threatening. So I am learning all I can about it, while I can. I’d rather be the one who understand what can be done, if ever there were to be a situation where AI is taking over the world,” he says.

Unfortunately when PolyBot was demoed at the White House, Rishi was in San Francisco attending a meeting.

“I do know President Obama was around, but I am not sure if he stuck around for the demo. He is the POTUS after all,” he says.

So how does it feel being part of a project that was presented to one of the most powerful man in the world - the US President?

Honestly, it feels unreal. Who thinks that this small stupid idea that you have been pondering over and building for sometime is going to go all the way to the Whitehouse? I still pinch myself sometimes to verify if all of this is actually real,” he says.

He says his journey so far has been empowering. “The idea of a ‘somebody’ who hails from a small town in Rajasthan who most people in India haven’t even heard of, builds and showcases an idea, at the place that is arguably be the most powerful place in the world, speaks a lot about the power possibilities. It restores your faith in the power of ideas and it tells you that anything is in fact possible,” he says.
Rishi hopes to us AI to compliment and not take over work in every day lives. “I would like to see people learn the tools and techniques of AI as any other skill and be educated enough to know when to use and when to not. We need to evolve faster than AI does,” says the engineer.

He is looking forward to using AI to better agriculture in India. “From letting farmers know when is the best time to water their fields, to letting them know how much time do they have to rotate the soil layers, to potential seed combinations they can use in their farms for best yield with available resources ,the possibilities are endless,” explains Rishi while descrbing AI’s potential in agriculture.