Get ready to groove to The Raghu Dixit project

Ready, steady and po to groove to Indian folk music band The Raghu Dixit Project. He will be performing at the Baleno Wicked Weekends today at Indigo Live - Music Bar at 9 pm.

BENGALURU: Ready, steady and po to groove to Indian folk music band The Raghu Dixit Project. He will be performing at the Baleno Wicked Weekends today at Indigo Live - Music Bar at 9 pm. “In Bengaluru, people start singing along. I feel that they do not need my music services,” says Raghu Dixit (giggles) adding that he is happy that corporates are coming forward to support independent music.

His music is known to be a mix of Indian ethnic music and styles from different parts of the world and it is this diversity that inspires him.

“India is such a diverse country. There are so many languages, cultures and great literature in each language. For me, I do not need any particular inspiration. Inspiration is everywhere," he says.

Donned in kurtas and lungis that represent his music and where he is from, he says he is not fascinated by kurtas and lungis but proud to wear them. “The dress is a representation of where we come from - South India. It represents our folk music - colourful and vibrant.” Among his compositions, his current favourite ones are Gudugudiya in Kannada and Ambar in Hindi.

It was a challenge by his classmate at school that got him into music. Raghu, who was undergoing training in Bharatnatyam, was challenged that if he were a real man, he would not dance like women but pick a guitar and become a rock star. He accepted the challenge and learned the instrument without the knowledge of his parents who did not support anything Western. He says, “Later when they got to know, I used to get scolded by them sometimes as I would always play guitar and not study, but I was good at academics too. So, they later understood.” 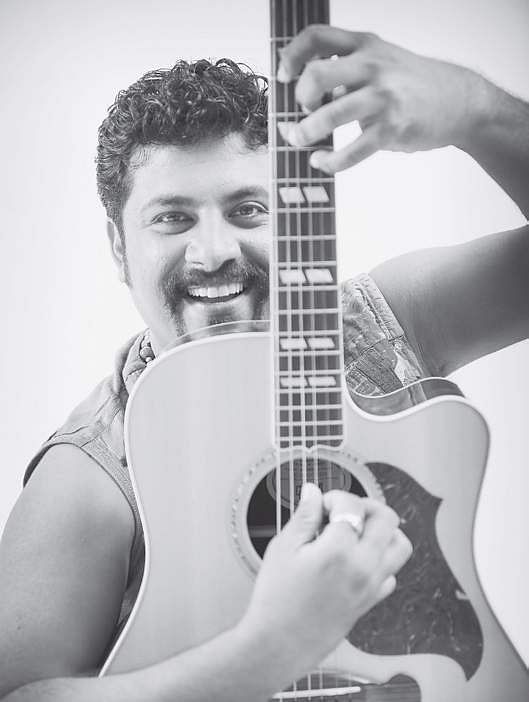 It took him about eight years to get a break. He adds, “I wouldn’t call it a struggle. I was involved in other things like radio jingles, advertisements and corporate films. I never went hungry or homeless. The struggle was in terms of being heard.”

But he thinks there are many opportunities for independent artistes now. “If an artiste thinks there aren’t enough opportunities, he should look into what he is doing,” he says. He has performed for various mediums like TV shows and movies but he loves to be on stage and perform live with crowd joining him, the most.

Married to a dancer and also a trained Bharatnatyam dancer himself, he says he is not considering to get into dance for now. “I do belly dancing now,” he adds and laughs.

Ask what he would do if he were not challenged by his classmate, he says he would probably be a scientist or an actor. “I don’t know what I would have become. I didn’t have plans. I would go by destiny. But yes, I would love to be a school teacher some day. I would teach science and kids theatre.”