BENGALURU: Namma Metro on Wednesday accepted `500 and `1,000 denominations to top up smart cards, but insisted on smaller denomination notes for tokens.

While commuters were permitted to top up a small amount on their cards and the balance amount was returned during the first half of the day, Metro ran out of change by afternoon. 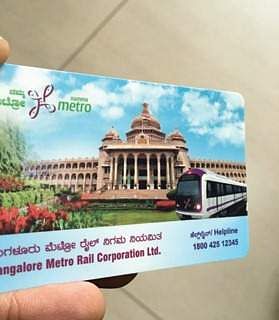 A common feature across stations was that of passengers holding a `500 note and pleading for change. Irate public broke into arguments with Metro staff demanding that they be returned the balance amount.
Bangalore Metro Rail Corporation Chief Public Relations Officer U A Vasanth Rao said, “We accepted `500 and `1,000 notes only for topping up smartcards across our stations on Wednesday and not for tokens.”

However, A Lakshmi, a commuter from Mysore Road to Cubbon Park station, claimed, “I gave `500 in the morning for topping up my smartcard. It was not accepted at Mysore Road station.”

An official at Sir M Visveswariah Metro station said, “We were supplied 15,000 hundred rupee notes in the morning. The notes got exhausted by afternoon.”

A counter staff at Cubbon Park station said, “In case of the Varshik Metro cards (which allows one to top up as the money exhausts up to `1,500), one can get a refund. Hence, many, who have this category of cards, did not mind topping them up.”