BENGALURU: Two people who created a fake website and caused losses of around `85 lakh to multinational firms were arrested by Vijayanagar police on Tuesday. The duo was arrested in New Delhi based on a complaint filed by Aiplex Software Ltd that has an office in Vijayanagar.
The CEO and founder of an anti-piracy firm, who allegedly funded the duo to carry out operations, is at large. A police source said he is the son of a retired IG of Delhi and an alumnus of Indian Institute of Technology (IIT). 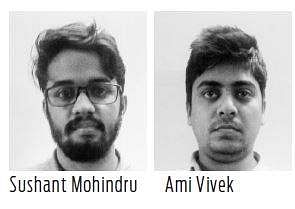 The arrested are Ami Vivek (31), a native of Rajasthan, and Sushant Mohindru (23), a native of New Delhi. Another accused in the case is Abhishek Dhoreliya, the man who funded the duo.
According to police, Sushant worked with Aiplex (aiplex.com), an anti-privacy firm, for three years. He then joined MarkScan (markscan.co.in), another anti-privacy company owned by Abhishek in New Delhi, and worked as the operations specialist. He took care of all digital content protection projects. Vivek too worked at MarkScan.
Police said Abhishek allegedly wanted to defame his competitor company, Aiplex, and sought the help of Sushant and Vivek.

The duo created a website (aiplex.us) claiming to be Aiplex and started operations. This is called website spoofing. They sent notices to companies like MTV Colours, Fox Sports India, Eros International, Bollywood Life, Amazon web services and deactivated their videos on social media sites like Twitter saying there is an anti-piracy breach. They also demanded money to handle their online operations. The companies transferred the money to aiplex.us assuming it was a part of aiplex.com.
However, officials of the company soon realised they had transferred money to the wrong firm and filed a complaint with Vijayanagara police. The police approached cyber crime police who tracked the men using the IP addresses. They found that the duo had created a fake website and email IDs for communication. The arrested men were allegedly paid `80,000 each by Abhishek.
Between August 29 and September 17, the trio had caused losses to the entertainment companies by blocking their videos on social media platforms.

Police said the three men are well-versed in the working of the industry. According to the MarkScan website, Abhishek “has over 14 years of experience, primarily in strategy consulting & banking across Europe, Middle East and India. Abhishek holds a B.Tech. from IIT-Kharagpur, a Masters from FMS Delhi, and an MBA from the London Business School.”
The website also mentions Sushant’s credentials. “Sushant is a certified expert in network security and has an experience of 5 years in the content protection domain.”
Aiplex Software’s Vijayanagar office had filed a complaint in this regard. Express tried to contact officials of the firm but they were not available for comment.