A good samaritan from city helped a 3-year-old boy reunite with his father, who is a police sub-inspector in Andhra Pradesh.

BENGALURU: A good samaritan from city helped a 3-year-old boy reunite with his father, who is a police sub-inspector in Andhra Pradesh.

The minor identified as Sarath Chandra, son of Krishna Mohan, sub-inspector with Byrareddipalli police station at Palamaner taluk in Andhra Pradesh, was kidnapped on November 18. The incident took place while he was playing in front of the home around 6 pm. 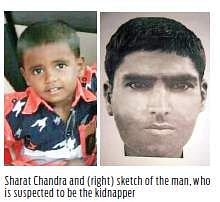 The man later abandoned the child near Tin Factory in Bengaluru. Around 5.30 pm on November 19, Thippamma, a resident of Mahadevapura, spotted Sarath alone and crying.

Assuming the boy was lost, she waited with him for some time, but no one came. She then took him to her house and gave him a bath and food. Next day, she took him to Mahadevapura police station.

By then, the photo of the missing boy had gone viral on WhatsApp in police circles. It helped Mahadevapura police recognise Sarath and an alert was sent to Andhra Pradesh police.

A team from Andhra rushed to Mahadevapura police station on Wednesday and confirmed the identity of the boy. Krishna Mohan and the boy were reunited the same day.

“We formed different teams comprising five inspectors, 15 sub-inspectors and 50-60 constables to crack the case. We got CCTV footages of the man boarding a lorry with the boy. We were informed by the lorry driver that they had got down at Nandyal checkpoint to go to Karnataka. The accused even collected `150 from few persons at the checkpost showing the kid,” said A Surendra Reddy, Police Inspector, Palamaner.

“We had circulated the boy’s photo to Karnataka and Tamil Nadu police after we got to know that the accused had boarded a vehicle to Bengaluru. He even tried to sell the kid. Efforts are on to nab the accused,” the inspector added.