Hey math! let’s jazz those numbers up, shall we?

The link between mathematics and music dates back to Socrates and when the first instruments were designed.

BENGALURU: The link between mathematics and music dates back to Socrates and when the first instruments were designed.  Two former students of The University of Cambridge, Sam Hewitt and Louis Day, conducted workshops with over 50 students on this link in the city. 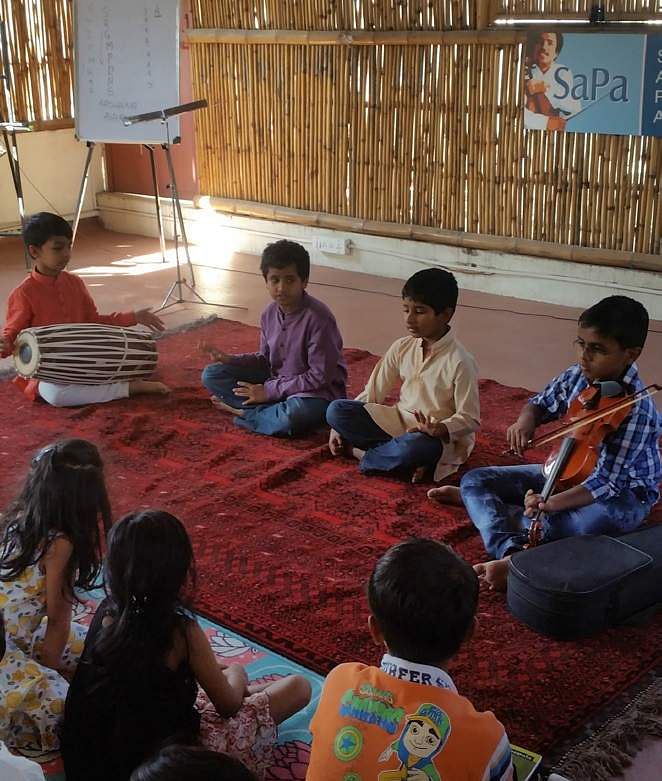 Deducing The Beatles
Be it illustrating the complexities of Beethoven’s composition or breaking down tunes of The Beatles, researchers have always been intrigued by the understanding that music and math share.
In 2009, Professor Jason Brown of Dalhousie University resolved musical history’s greatest mysteries: Why has no one been able to replicate the first chord in The Beatles’  hit A Hard Day’s Night?
While several musicians tried and failed, math came to the rescue. Professor Brown sampled the opening chord of the song and using math separated out all the distinct frequencies.  He even discovered a surprising element relating to George Martin’s fifth Beatle status. Math doesn’t sound as dreadful anymore, does it?

When the Notes are Numbered
And this is exactly what happened at a workshop conducted by Sam and Louis. The two mathematicians and musicians are currently working with HeyMath! in
Chennai which collaborates with The University of Cambridge on projects.
They recently held a workshop on math and music with the students at Subramaniam Academy of Performing Arts (SaPa).

“As a jazz musician, there’s a lot of improvisation involved in my playing which follows a certain pattern. It helps to have a mathematical knowledge of patterns,” says Louis.
The 23-year-old from Manchester is a keen trumpet player, and was musical director for the Churchill Jazz Band, Cambridge. His musical interests now lean towards jazz and improvisation.
Throughout his journey in learning music, he acknowledges that his background in math has played an important role.

“While playing jazz, over a range of keys and chords, math helped me to think of the notes as numbers, which made it smoother for me to switch between keys,” he explains. Louis holds a BA degree and has a MSc in Physics.

Sam sees a “crossover in the parts of the brain” used for math and music. “I have learnt both math and music side by side, and somehow I’ve always had one discipline in the back of my mind while practicing the other. Without really meaning to do so, I apply mathematical concepts to music and musical concepts to math,” explains the 22 year old from Margate.

Sam is a musical scholar who went on to become a choral scholar at Trinity College.
While knowledge of math is not necessarily required in music, certain aspects of music become a lot easier and more efficient if the musician has an understanding of a few fundamental principles, believes Sam. “For instance, in my case, while trying to match up rhythms with people in an ensemble,” he adds.
He holds a BA degree and has a MSc in Physics.

Finding the Connection
So how did the two musical mathematicians help children in the city learn math better with music?  Sam and Louis used different games and exercises to inculcate an appreciation for both math and music, and to help the children understand the connection between the two. The exercises ranged from simple to complex depending on the age group they were speaking it, which ranged from five to 15 year olds.
The two even registered notable changes among the children after the workshop.

“ I noticed - they were very shy and hesitant to speak up at first. As the games began, they grew more and more involved. If there was a formula we were using, they got it immediately. Towards the end of the workshop all of them were shouting and crowding around us, and that was remarkable,” says Sam.
Initially, while we were introducing ourselves and telling them what we wanted to cover, we had a sea of blank faces, says Louis. “It was only once we sprung into action that they were eager to ask questions and respond. Their faces lit up as we started the games and that’s when we saw just how important it is to keep children engaged rather than just talk to them,” he adds.