Number of privately hired vehicles that cram in schoolchildren have multiplied ten times over, in the last six months, parents say they are helpless

BENGALURU: When the traffic department went hunting for private vehicles that ferry excess number of school children, they may not have expected to find quite so many. The first half of this year, till June, Bengaluru must have seemed a good, law-abiding city. The department had registered only 401 such cases.
In 2014, cops had registered 5,389 cases and, in 2015, there were 4,607 cases.

Then, the department launched enforcement drives and surprisingly, till October of this year, the number of offenders jumped ten times over – with 4,625 cases.
R Hithendra, GP & Additional Commissioner of Police (Traffic), says that it is just better detection. “We launched special drives and followed strict enforcement of laws,” he says. “We impose fines and cancel a vehicle’s permit and the driver’s licence.” 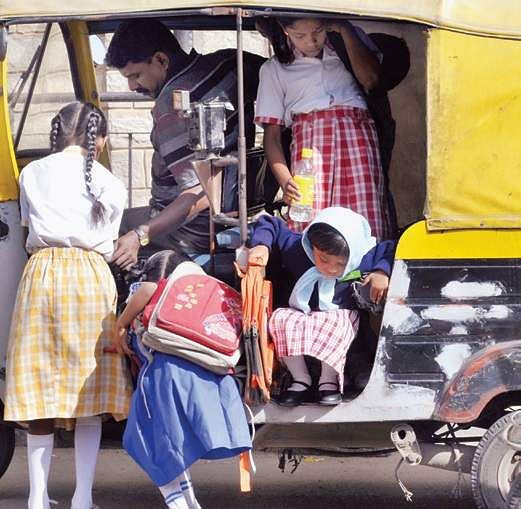 City Express found many autorickshaws ferrying more than six children, the legal limit, in various parts of the city such as in  Kormangala, Shivajinagar and even through  Infantry Road  that runs in front of the traffic headquarters. Most of the violators, we found, were autorickshaws. On August 29, in a drive conducted by Chickpet traffic police, 122 cases were booked against autos.

J Gnanendra Kumar, Joint Commissioner (Transport) Bengaluru Urban says, “If they do any alteration to the vehicle to accommodate more children, then too we catch hold of them.”

Drivers of vans and autos say that it is not profitable to ply with only the permitted numbers. An auto driver from Koramangala says, “To pick up and drop school children, we need to cut our routine trips and plan our schedule to their hours. So, if we take only few children, how can we get profit from it? Children are small therefore they can adjust unlike adults.” Marimuthu, an auto driver from Frazer Town, says,  “We can only take few a children, cannot take other trips and have to plan our day to their school timings. It is very difficult in this traffic.”
Van driver Manjunatha says that he takes children only according to the seating capacity of the van. “If we take more, parents will refuse to send their children,” he says.

But parents say that they do not have much say in the matter. They find autos and vans are more convenient because they can come through smaller lanes and pick up children from the doorstep. With bigger school buses, the parents may have to wait at bus stops on main roads. Deepanjali from SG Palaya says that she chooses private transportation because the one provided by the school does not come to her neighbourhood. “I am forced to depend on private vehicles,” she says.

A parent from Jayanagar, who did not want to be identified, says, “Many of the parents, including me, depend on autos and vans because transportation provided by the school is not affordable.”