His portraitsb of self and stutter

BENGALURU: Bhuvanesh Kumar remembers the first drawing he made, of a postbox when he was in his first standard. He started on water colours three years later, when his uncle gifted him a set. He can’t remember when he started stuttering.

“My parents tell me I was around 5 to 6 years when I got a seizure after a fever and the stuttering followed,” says the artist who paints, photographs, videographs and does performance art to deal with stuttering and psoriasis. 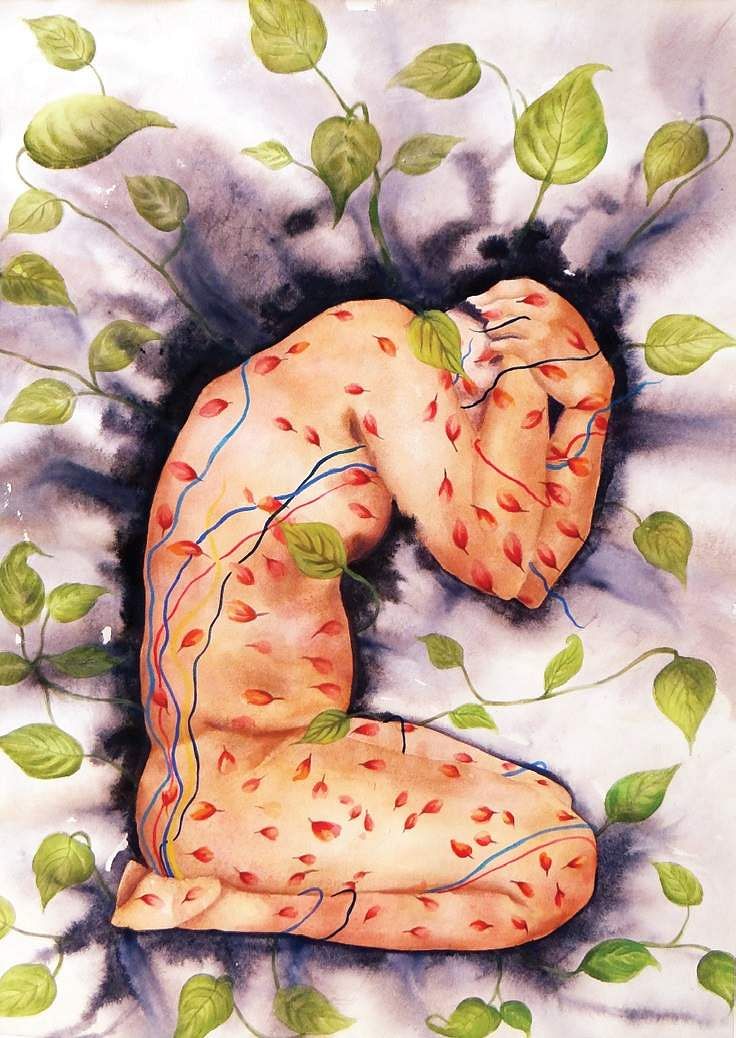 “I used to be alone most of the time even in my school days,” he says. “I was sensitive and would get hurt when other students made fun of me, I thought even my teachers were insensitive.” He felt safer with his art.
In high school, his Kannada teacher Ramesh encouraged him.  “He asked me to illustrate a Kannada poem,” says Bhuvanesh. For the first time, he thought he could express himself through art. “Ramesh Sir also suggested I join an art school, and I took his suggestion seriously.” Bhuvanesh has done his BA in arts from Ken School in Bengaluru and Masters in Fine Arts from Delhi University’s College of Art.
Bhuvanesh’s paintings are intensely personal but he believes that other people will relate to them if the artist is “sensitive and transparent”. “For example, my struggle with stuttering may remind them of their struggles in life,” he says.

In one of the paintings, the subject’s body breaks out in petals and delicate leaves.
Bhuvanesh believes that his psoriasis is his body’s way of expressing feelings repressed by his stuttering.
“I think my body has found its way to throw out the feelings,” he says. “I have started accepting the changes happening on my body rather then being worried about them or feeling depressed.”
He has started to like the pink spots that come from psoriasis. “They look looks like flower petals and even their texture feels good sometimes. So the painting,” he says.

In Body with Medicens, the subject’s right hand is choked with medicines and the psoriasis spots seem to extend into letters and language. “This was done at a time when my body was undergoing many changes, it could not process all the medication I was taking,” he says.

“The hidden and unexpressed words were coming out of my body as visual poetry as the spots.”
There are times when his feelings are beyond his grasp, like in a painting that shows his hands reaching out to his lower back and for clouds that are out of reach.

“Our back is the only place where we cannot reach, with hands or with eyes,” he says. “Some of my hidden feelings/words remains unreachable and they are like floating clouds and I can only feel them inside and not put them out.”
People have told him that his paintings helped them come to terms with their body. “One girl told me about her skin problem,” he says. “She used to hide herself from the people and spoke to me about this for a very long time.”

Another 50-year-old woman from London, who had struggled with her stammering, reached out to him through Facebook.
“She wrote a long mail and added that she is coming to India in January and she wants to meet me and to see my paintings in person.”
Another man said that Bhuvanesh’s paintings helped him come to terms with his depression.