BENGALURU: THE District Mineral Funds (DMF) meant for rehabilitation and resettlement of people in mining-affectted districts of Ballari, Chitradurga and Tumakuru are lying unutilised. Experts, NGOs and affected communities have called for better planning for the utilisation of `487 crore fund by the respective gram sabhas. While `310.05 crore was collected from Ballari, Chitradurga and Tumakuru, the rest of the state contributed `167 crore. 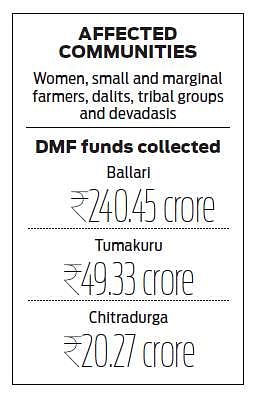 The DMF and KMERC funds need to be treated as separate funds for quick sanction, they said. Ashok Srimali of Mine, Minerals and People told Express, “The respective Gram Sabhas must be involved at all stages; right from planning at village-level to implementation, audit and monitoring of the DMF. Karnataka has set up DMFs in all districts and funds are being collected. But they are either lying unutilised or being used outside the affected districts for the development of cities.”

M Bhagyalakshmi of Sakhi Trust, Hospet, said, “Whenever we ask the government, they say they are awaiting the Supreme Court guidelines. Skin and gastrointestinal problems, malnutrition and addiction to alcohol are some of the major health issues people face. Water bodies and vegetation are badly affected and clinical tests should be conducted to know their adverse effects on people.” “Child marriage among devadasis continues in several villages. There are 10,000 former and practicing devadasis in Ballari alone, and a special plan is needed for them,” she added.