Bengaluru was ranked second in number of murder cases and third in crimes against women, according to ‘Crime In India - 2016’ report by the National Crime Records Bureau.

BENGALURU: Bengaluru has secured several dubious distinctions in terms of crimes committed among metropolitan cities, going by the National Crime Records Bureau-2016 data. Of the 19 cities listed in NCRB, Bengaluru ranks second in number of cyber crimes and murders committed, and third in crimes against women and children, and kidnapping cases. It has also pipped Mumbai in the crime chart.

However, crime rate in both the sub-heads was lower for Bengaluru than many other metros. The city has a lower crime rate — number of crimes per one lakh population — compared to several other cities in South India, with only Coimbatore faring better than Bengaluru. The city with 84 cases of crime against women per one lakh population was ranked ninth in terms of crime rate. Delhi had the worst crime rate against women (182.1 cases), followed by Lucknow (159.8) and Jaipur (144.1)

While Kochi has the highest crime rate, considering cases filed under IPC and Special Local Laws, with 2,553.7 crimes per lakh population, Nagpur had the second highest crime rate with 1714.6. Bengaluru is ranked 11th in the list. Cities like Jaipur, Patna and Indore fare worse than Bengaluru.

Also, among metros, number of convictions is highest in Bengaluru. Bengaluru saw most convictions (16,326 cases) followed by Delhi (9,837 cases) and Kochi (8,787 cases).

Bengaluru registered the second highest number of cyber crime complaints (762 cases) after Mumbai (980 cases). Courts in Bengaluru dealing with cyber crime cases too fared better among South Indian cities as pendency percentage was 93.1 — the sixth best in the country and above the national average of 95.7. T

In terms of crime rate, however, Jaipur registered the highest cyber crime rate with 17.3 cases per one lakh population, followed by Lucknow with 12.4. Bengaluru was third with 9 cases. 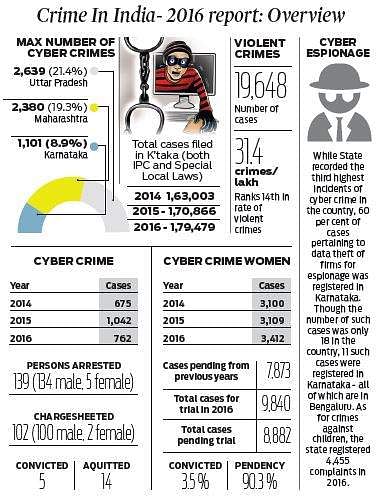