Once operational, approximately 1.20 lakh passengers are expected to take Metro daily to the airport.

BENGALURU: The arrival of Namma Metro’s airport link will bring the much-needed relief to commuters who travel regularly on Ballari Road to the airport. With an estimate of 1.20 lakh passengers expected to take the Metro daily to the Kempegowda International Airport (KIA) and surrounding stations, experts say this would be a sustainable solution which would make bottlenecks like Hebbal flyover tolerable. On Monday, the state cabinet approved the Detailed Project Report for the `5,950 crore project to provide Metro connectivity to the airport. The 29.8 km Metro line from Nagavara will have eight stations, Law and Parliamentary Affairs Minister T B Jayachandra told reporters.

The funding pattern for the `5,950 crore project will be: The  Kempegowda International Airport Authority will invest `1,000 crore; the state government, `1,250 crore; Bengaluru Metro Rail Corporation Ltd, `500 crore, and about `3,200 will be raised in the form of loans.The line, which will start from Nagavara and cross Hegde Nagar, Jakkur, Kogilu Cross, Chikkajala, Trumpet Interchange, KIA cargo complex and the current terminal, will be built as phase II-B of the Namma Metro. Originally, work on the stretch was supposed to start post the completion of phase 2 in 2021 but now it will be completed alongside. 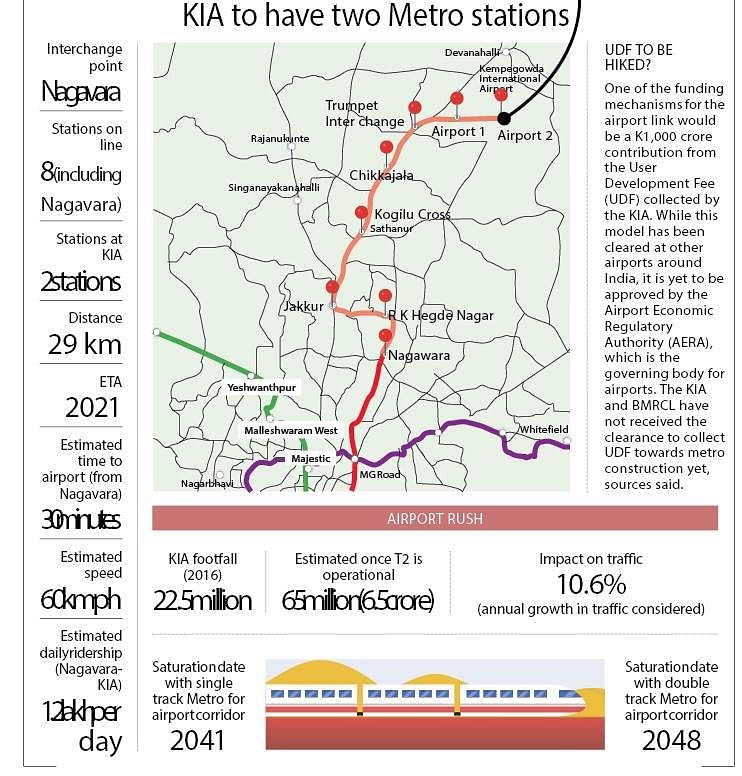 “Conservative estimates have been drawn up to arrive at the 1.20 lakh figure, which will be over and above the estimates for reach 6 between Gottigere and Nagavara. The airport line will have space for passengers to store their luggage and will operate with six coaches from the day it is launched,” said a senior BMRCL official.

This means that if the deadline is stuck to, the issue of bottlenecks on Ballari Road would be mitigated to a large extent. Work on an alternative road to the airport is also ongoing as the Bangalore International Airport Limited recently called for tenders for the construction of a south access road to the airport, which will link the one constructed by the Government. Coupled with the likely addition of a suburban rail service, all three modes of transport must be enough to cater to the growing demand on the stretch.

According to BIAL estimates, 6.5 crore passengers are expected to use the KIA once the second runway is completed in 2019-end. This figure will definitely increase by the time the Metro is made operational. “I believe nine coaches would be the ideal length of the train since passengers would be travelling on this line from all across the city. Timely completion is also very important,” said Sanjeev Dyammanavvar, a sub-urban rail expert.

According to a study done by Ashish Verma of the Department of Civil Engineering, Indian Institute of Science, to measure the impact of the defunct steel flyover project, with a 10.6% growth in passenger traffic at KIA, the Metro could serve the corridor up to 2041, even if half the road users made the shift to Namma Metro.

In this scenario, the traffic at Mekhri Circle and High Grounds junction would reach saturation (bumper-to-bumper) by 2041. “If the BMRCL chooses to keep some land available to build a double track in the future, the saturation of these junctions can be delayed even more. There is no question however that the Metro is a sustainable mode of transport and is very welcome,” he said.

Now we are on Telegram too. Follow us for updates
TAGS
Namma Metro BENGALURU Kempegowda International Airport