The Public Bicycle Sharing system in the city could have nearly 4,000 unisex bicycles equipped with GPS and 350 docking stations at places that witness high footfall.

BENGALURU: The Public Bicycle Sharing system (PBS) in the city could have nearly 4,000 unisex bicycles equipped with GPS and 350 docking stations at places that witness high footfall. Four Metro stations in the Central Business District (CBD) area is set to have such bicycle parking lots in their vicinity according to a proposal sent recently by the Directorate of Urban Land Transport (DULT) to the state government for approval. 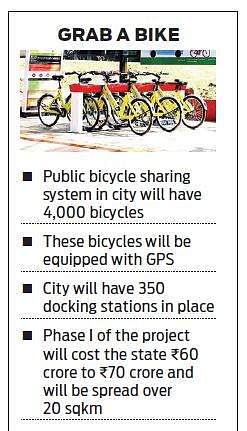 In his state budget speech on March 15, Chief Minister Siddaramaiah had mentioned that the ‘bicycles on hire’ scheme would be taken up in select clusters in Bengaluru.

The Phase-I of PBS, which could cost between `60 crore and `70 crore, plans to cover 20 sqkm of the city’s total area of 790 sqkm, said N Murali Krishna, special officer, DULT. “The docking stations would be positioned within 300m to 500m of one another,” he said.

Such stations will come up on or near MG Road, Vidhana Soudha, Indiranagar and Cubbon Park Metro stations. Each docking spot will have a length of 12m and a width of 3m to 4m.

An internal survey carried out to identify cycle parking spots has also identified BDA complexes, traffic and transit management centres, BBMP offices and areas in the vicinity of public parks. “The plan now is to run the hiring scheme between 6am and 10pm though it could be increased up to 11pm in stations close to Metro stations if there is a demand for it,” the special officer said.

Swipe card and take a cycle DULT has also recommended creating a special purpose vehicle in partnership with stakeholders like BMRCL, BMTC and BBMP to administer the project.

Elaborating on the operations aspect, a DULT official said that a person hiring a bicycle needs to go online and register for a swipe card using an identity card or walk into one of the registration centres that will come up in future. “One just needs to use the swipe card which works on Radio Frequency Identification Technology to unlock the vehicle and take it around. It need not be brought back to the same place and can be parked at any other docking station available near one’s destination,” he added.

People are not allowed to take the vehicles back home at night. “The whole idea is to make the bicycle readily available for others who want to make use of them,” Krishna said.

To popularise the scheme, the public would be permitted to use the bicycle free of cost for up to one hour. “The cyclist will be charged `5 for every succeeding hour,” he said.  The system is quite robust and the GPS keeps track of the movement of the bicycle. “If a cycle is lost or stolen, it can be easily tracked,” he added. There will be a redistribution vehicle which will ensure that cycles are rushed to the docking stations where the demand is high.

Asked about how it is different from a similar scheme implemented in Mysuru, the DULT officer said that it was done on a smaller scale there with 48 docking stations and 450 cycles. “The project infrastructure and operations cost, including staff and maintenance cost, calculated for five years at Mysuru came up to `20.52 crore,” he said.

Now we are on Telegram too. Follow us for updates
TAGS
public Bicycle bengaluru transport parking