Odour and ulcers in the mouth could be signs of bad health .Oral health can detect diseases such as auto immune disorder and diabetes.

BENGALURU: If you’re suffering from bad breath or mouth ulcers, do not opt for sprays, mints or ointments. The odour and ulcers are signs that your health is not in the best condition, say dentists.
For Sujata (name changed), a 48-year-old IT professional in Bengaluru, oral health was of utmost priority. It came as a shock to her when her gums started bleeding and a few ulcers developed. She thought it was because of stress.

The preliminary medical check-up round convinced the dentist that the blisters in her mouth were something more, so a blood test was recommended. Sujata was diagnosed with a life-threatening auto immune disorder called Pemphigus Vulgaris, a rare disease that causes painful blistering on the skin and mucous membranes.“The early diagnosis of the disease through oral symptom saved her life,” says Dr Srivats, who treated Sujata. 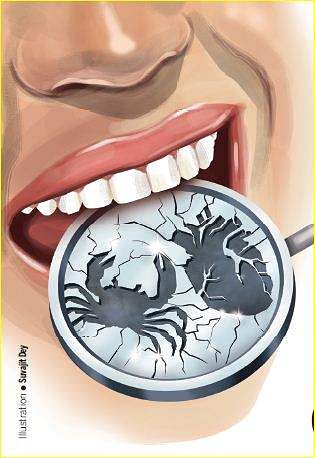 Pale tongue could be a symptom of anaemia
Eighteen-year-old Rhea constantly suffered from bad breath. She tried everything available in the market. As her efforts were in vain, she went to see a dentist, who identified plaque and cavities. But he also noticed the paleness on her tongue.According to the dentist, her tongue appeared  swollen and tender, so he suspected anemia - a condition where haemoglobin levels are low, and you experience fatigue, dizziness and weakness.  The tests proved that Rhea was borderline anemic.

If you are experiencing pus on the gums along with swelling and bleeding, they could be signs of cardiac diseases. “The bacteria and infection in your mouth could travel to your heart and contribute to coronary artery disease,” says Dr Srivats Bharadwaj, paediatric and special needs dentist at Vatsalya Dental.It may also contribute to the formation of clots or plaque build-up in the arteries, which can interfere with blood flow to the heart,” he adds.Another deadly disease that can be diagnosed orally is gastroesophageal reflux disease GERD). It is difficult to detect it early, but in case it is, chances of osophageal cancer is reduced. Symptoms of this include the erosion of the enamel from the insides of teeth, especially the upper back molars.

Gateway to the body
The mouth plays a critical role in various activities, including digestion, respiration, and speech. It is frequently involved with many general health or systemic diseases.  “Oral health is the gateway of entry to the rest of the body, and has a direct impact on  general health,” says Dr Srivats, who is also the founder and CEO of Vatsalya Dental. “The mouth is a window to everything going on in your body. Hence, it helps with the detection of early symptoms of general health diseases,” he adds.

According to the Academy of General Dentistry, more than 90% of all systemic diseases produce oral signs and symptoms. Symptoms of diseases and lifestyle choices can be identified in the head and neck region The mouth precedes the appearance diseases at other locations in the body, this early detection in the mouth can lead to early diagnosis, prompt and conservative treatment, and improved prognosis,” says Dr Saakshi Hinduja, consultant dentist at Aster CMI Hospital.

Now we are on Telegram too. Follow us for updates
TAGS
mouth problems