2m-wide cycle track will run from NICE Road to Ramanagara; to be built parallel to proposed Bengaluru-Mysuru highway.

Officials of National Highways Authority of India (NHAI) say 2m wide cycle tracks along a 30km stretch will be facilitated from Panchamukhi Ganesha Temple after NICE road in Bengaluru to Ramanagara. This will be the longest elevated cycle track in the state.

The move is also expected to benefit tourists who cycle to destinations like Bidadi and the hills in Ramanagara district. NHAI officials say cyclists will be exempted from toll charges and the move is expected to promote the eco-friendly transport mode.

B T Jwalendra Kumar, project director, NHAI, said a dedicated cycle highway will encourage more people to explore tourist destinations in Ramanagara. “We will facilitate dedicated tracks on both sides of the expressway to encourage cyclists. The concept is already popular in many foreign countries.” he said. “This will also boost tourism,” he added.

Many cyclists welcomed the proposal. Sachin Kuriyar, a member of Karnataka Amateur Cycling Association, said, “There are several instances of cyclists meeting with accidents because of the lack of a dedicated cycle track. A dedicated track will ensure safety of cyclists. The track will be particularly useful for cycling groups.”

Work on the proposed six-laning of Bengaluru-Mysuru expressway is likely to be begin in the six months. It will take just 90 minutes to reach Mysuru from Bengaluru once the project is completed. The project will cover a distance of 118km between Panchamukhi Ganesha Temple after NICE road in Bengaluru and Columbia Asia hospital junction in Mysuru. 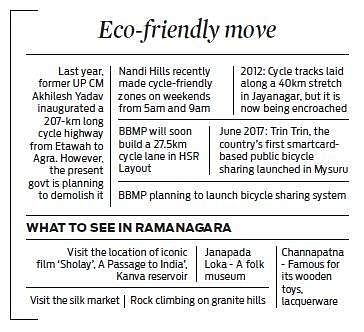 Now we are on Telegram too. Follow us for updates
TAGS
cycle track road