Bengaluru Metro to train its young engineers to be backup drivers

Assistant Engineers and Assistant Executive Engineers of the Rolling Stock department will be trained to manage all operations which include running of trains, a source said.

BENGALURU: The Bangalore Metro Rail Corporation (BMRCL) management has now delivered a master stroke. Following strong objections from Union members to its recent move to rope in ex-servicemen to constitute a backup team to ensure uninterrupted train operations in the case of any eventuality, BMRCL has now decided to axe that plan. It will draw upon its vast pool of young engineers instead. 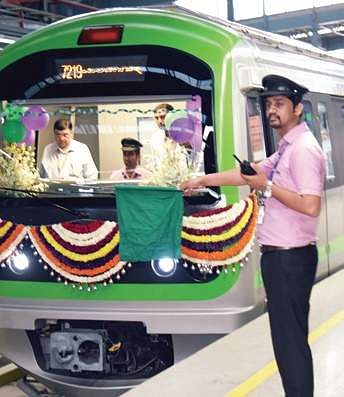 Under the new plan finalised on Saturday, Assistant Engineers (AEs) and Assistant Executive Engineers (AEEs) of the Rolling Stock department (that takes care of coaches) will be trained to manage all operations which include running of trains, said a Metro source.

The training for the engineers will commence in batches, beginning from August. “The plan is to take on board only engineers below 35 years so that they are fit in all aspects. A stringent medical test will also be conducted before they are inducted into the backup operations team,” the source said. “No one can accuse them of lacking the technical qualifications,” he added.

Since most engineers are on contract for a three- to four-year period, this works out better for Metro too. Former service personnel or cops are only on a one-year contract period.
“Of course, apart from the salary drawn from the Rolling Stock department, the engineers would be paid extra whenever their services are required,” the source said.

Ever since the plan to induct ex-servicemen and cops was announced three days ago, the Bangalore Metro Rail Employees Union had objected strongly.

“Since ex-servicemen or cops do not have the technical qualifications that the present train operators as well as those manning the control systems in the Operations and Maintenance Division possess, they will not be able to handle emergencies and this could pose a danger to passenger safety,” Union vice-president Suryanarayana Murthy had told Express.

“Eyesight and other health problems are bound to be present in the case of an individual above 60 years,” he added. When asked if engineers will have reservations in working as train operators if the need arose, the source said, “It is not a question of inclination. When the organisation requires their services, they are expected to chip in.”

Metro calls for parking tenders for 3 stations
Bangalore Metro Rail Corporation has issued tenders for parking lots for Banashankari, R V Road and Mysuru Road stations on Saturday, said Chief Public Relations Officer, U A Vasanth Rao. The last date for submission of applications will be at 3 pm on July 31 and those who have won the bid will be announced on the same day. Out of 42 Metro stations, 16 have parking facilities.

Now we are on Telegram too. Follow us for updates
TAGS
metro engineers The Bangalore Metro Rail Corporation backup drivers