Art students engage with the gods

BENGALURU: Projects conceptualised by artists and designers from Srishti Institute of Art, Design and Technology are on display at ‘The Srishti Collective 2017’ at the Kings Court, Palace Grounds till July 20. 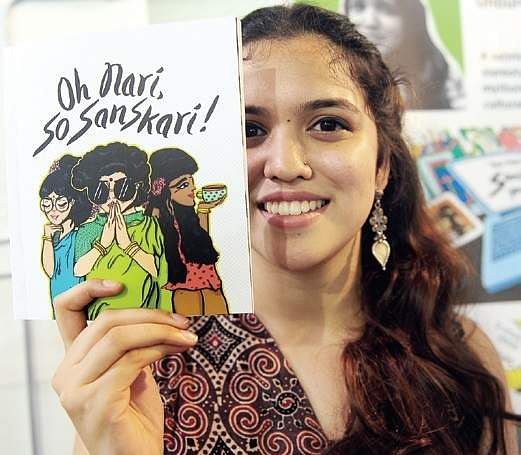 While there is a project on masculinity, there’s one on female stereotypes in Hindu mythology. In ‘Oh Nari, So Sanskari!’, Annushka Hardikar does a satirical take on Kunti, Gandhari and Draupadi. She wanted to make these characters more relatable to an 18-year-old of today. “So, I imagined how a fashion magazine would portray these characters,” she says. “Draupadi is a modern woman, Kunti is diplomatic and careful about  what she tells others and Gandhari is a radical feminist who speaks her mind.”

Jayesh Joshi wanted to decode masculinity. He says he could find plenty of examples in Bollywood but wanted to dig deeper. So, he studied Mahabharata in eight different formats to understand its characters. He has painted Duryodhana facing self-doubt, Drona’s aspirations for Arjun and Yudhisthira’s helplessness. He says, “Arjun tries to accept that he is now Brihannala who has to teach dance to princess. Bhima doesn’t shed tears when his son dies in the war.” He named his project Undecided because he is still not sure if he is the kind of man to cry in public. He says the challenge was to analyse each character from Hindu mythology without being blasphemous, particularly because he is a Christian. “There were technical challenges,” he says. “My computer and software crashed while working on oil paintings on 3x4 feet canvas.”

Sagarika Bhatia has always been fascinated by geographies and landscapes. Inspired by a Japanese artist Mitsumasa Anno, she has documented her travel from Dehradun to Spiti Valley in her work ‘The Middle Land’. She says, “My work focusses on the landscapes. I found my inspiration in Spiti Valley. How you relate with nature, when your species is not around, is different.”

Where happiness is a crime

(Film; Theme: ‘Down the Rabbit Hole’)

The project Jya Sukh Guno Che (Where happiness is a crime) is based on Vrajvani in Kutch, Gujarat. Sanchitaa Agarwal visited the place this February and learnt from local communities that, 500 years ago, 140 Ahir women sacrificed their lives when men from their community beheaded a man playing Dholak for the women. She says, “The women believed it was a recreation of Krishna’s Rasleela. They believed the dholak to be Krishna and considered themselves his gopis. They danced without a stop for several days and this angered their men.” Sanchitaa tries to depict the reverence Ahir women had for their God and the emptiness she felt when she visited their  burial ground, now a temple, through her film. The film uses hand animation and the theme of Ahir embroidery.

In ‘Pauranik Pashu’, Virat Tiwari combines his interest in history and mythology, and love for animals. He explores how the animals used as vahanas by Gods complemented them. Virat says, “Buffalo is a vahana of Yamraj. The animal is said to be senseless savagery that complements death. Nandi the bull which is a vahana of Shiv is known for fertility and strength.” He has developed their 3-D models.