Bars and restaurants in CBD areas knock on court’s door

BENGALURU: Ma Many bars and restaurants in Central Business District (CBD) have knocked on the doors of Karnataka High Court seeking directions to the state government to denotify the stretch of national highways passing through the city and renew their licences for the current excise year starting July 1, 2017 to June 30, 2018. 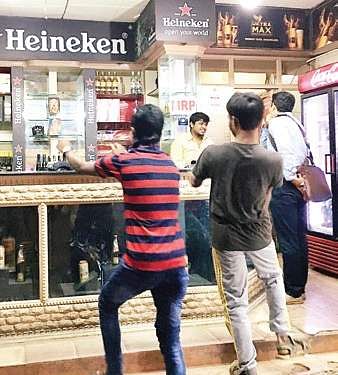 Hearing a batch of petitions, including that of Koshy’s Pvt Ltd on St Marks Road, Justice Vineet Kothari asked the Advocate General to make the state’s stand clear on the next date of hearing on Thursday in view of the urgency of the matter. Most of the petitioners are CL-9 licence holders.  The judge issued notices to the additional chief secretaries, excise department and public works department, Commissioners of Excise and BBMP, Ministry of Road Transport and Highways and National Highways Authority of India (NHAI).

“Portion of the national highway that has been bypassed would cease to be part of the national highway system and no longer vests in the Government of India. The state government to whom the abandoned portion of the highway is made over is competent to transfer it to any local authority under its control. Therefore, the stretch of 77.64km passing through Bengaluru city mentioned in a communication dated June 15, 2017 as being abandoned has automatically been made over to the Government of Karnataka as ‘Urban/Local Authority Roads’,” the petitioners said.
They contended that this stretch located in the heart of the city remains closed for vehicles on occasions such as New Year’s Eve, which goes to show that it not a highway in spirit at least.